The suspense is a nail-biter: Will she sign the petition or not?

This is not like clicking a button to offhandedly add your name to a Change.org list: We are in 1970s communist Czechoslovakia and publicly supporting a singer imprisoned for telling a joke that displeased the authorities is no trivial matter. Stanekova, a successful writer, carefully weighs the pros and cons of signing. For instance, would her fame help or undermine the cause? The answer is yes. 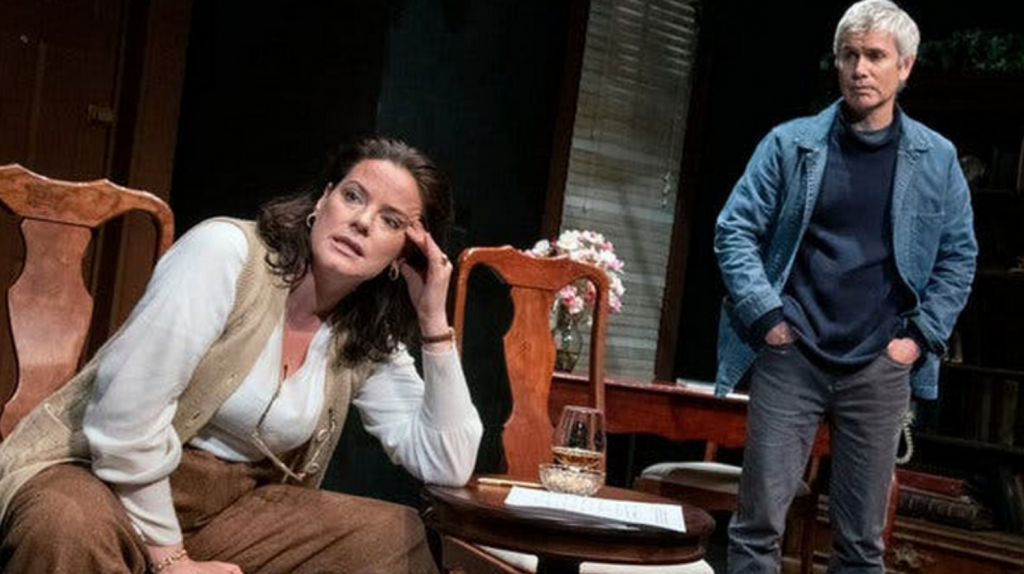 Stanekova (Danielle Skraastad) games up scenarios in a running monologue while her friend Vanek (David Barlow), who brought the petition, silently waits. The scene goes on. It is terrific political theater, an absorbing presentation of moral dilemmas and practical tactics.

“Protest,” which runs about 30 minutes, was hatched in the heat of the moment by Vaclav Havel, the dissident Czech playwright who went on to become his country’s first president. It is the strongest offering in the Potomac Theater Project’s “Havel: The Passion of Thought,” an omnibus of five works under Richard Romagnoli’s sometimes shaky direction. (The company is presenting the show in alternance with Tom Stoppard’s “Dogg’s Hamlet, Cahoot’s Macbeth” — the playwrights were friends and influenced each other.)

The core of the evening is Havel’s so-called Vanek plays, a trilogy composed in 1975 and 1978. The plays were banned in Czechoslovakia so they were performed in people’s living rooms and even recorded on vinyl.

What registers at first is Vanek’s passivity. Though accretion, you realize he is both sounding board and catalyst — a neat encapsulation of a writer’s role in an authoritarian community.

In “Interview,” Vanek faces the loutish manager (Michael Laurence) of the brewery where he has been assigned to work. The brewmaster, guzzling his own product, engages in an increasingly drunken soliloquy from which it emerges that he is trying to get Vanek to inform on himself. The play might work better were Mr. Laurence not overacting the brewmaster into googly-eyed caricature.

Next up is “Private View,” where Vanek is subjected to the antics of a well-off couple (Christopher Marshall and the very funny Emily Kron) working the system to their advantage. The humor is heavy-handed enough to make a dent against an Iron Curtain, and the piece descends into the type of absurdist farce that has not aged well.

If Vanek can’t find his place between the boorish worker of “Interview” and the arrivistes of “Private View,” he is a little bit more at ease with a fellow writer in “Protest,” even though she is accepted by the regime and he is not. Ably carried by the sober Ms. Skraastad (the character was originally a man named Stanek), this one-act is more formally traditional than the other two, and more effective.

The Havel trilogy is bookended by Harold Pinter’s “The New World Order,” from 1991, and Samuel Beckett’s “Catastrophe,” from 1982.

In the chilling amuse-bouche, two men (Mr. Laurence and Mr. Marshall) look over a third, who is wearing a hood (Mr. Barlow). The duo tease their prisoner by alluding to what they are going to do to him and his wife. It is psychological torture, short but definitely not sweet.

Beckett’s play, which he dedicated to the then-imprisoned Havel, centers on a mercurial director (Madeline Ciocci, in a ridiculous pseudo-noir getup) and her assistant (Emily Ballou) as they make a man (Mr. Barlow again) pose this way and that. He is reduced to a living doll devoid of thought and will, subjected to the whims of a tyrant. Sadly, the miscast young actresses are unable to impart any gravitas to the material, making for an unfortunate coda to the evening.