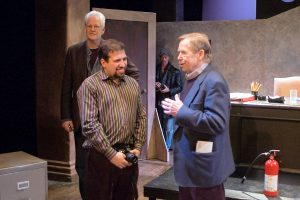 In Audience, by Vaclav Havel, the first of the Vanek plays. Ferdinand Vanek, a dissident writer, is forced to work in a brewery, so that he can contribute to society rather than be an intellectual bourgeois burden. The brewmaster calls him in for a friendly talk, or possibly an interrogation. Tt is clear that the brewmaster desperately wants something. It is not at all clear what that something is.

In The Meeting by Edward Einhorn Ferdinand Vanek’s niece, Frida Vanek, a Czech-American, asks for a meeting with Vanek’s old acquaintance Stanek, now planning to run for office in the Czech Republic.  She brings some damaging information.  Should she use it?

In Infiltration by Petr Erbes Jr, Winner of the Vaclav Havel Library Foundation’s contest on the theme of Ferdinand Vanek today, The character Vanek is now a young man working at a puzzle factory, in a play set in the current Czech Republic.  He wants to help the workers there, but finds himself a misfit.

Vaclav Havel (1936-2011) was a playwright, essayist, political dissident, and the former president of Czechoslovakia and the Czech Republic. He became well-known as a dramatist in the 1960s when his plays The Garden Party and The Memorandum were seen on world theatre stages. In the 1970s, he was one of the authors of Charter 77 – a manifesto calling for the Czechoslovak government to adhere to the human rights provisions of the Helsinki Agreement. Around this time, Havel released The Power of the Powerless, a powerful political essay that dissects the nature of totalitarian rule and the resistance that emerges within it.
In 1989, he became the leader of the two-month long Velvet Revolution, which culminated in his ascension to the Presidency of the re-established democratic Czechoslovakia. Only a few months earlier, he had been released after being held by the communist regime for his activities in defense of human rights.

Edward Einhorn is a playwright, director, translator, librettist, and novelist.  He is the Artistic Director of Untitled Theater Company No. 61.  Some of his notable Czech projects include The Velvet Oratorio, an opera oratorio retelling the events of the Velvet Revolution, Cabaret in Activity and Vaclav Havel’s Hunt for the Pig. He has just finished directing the film version of Karel Svenk’s The Last Cyclist, originally written in Terezin, due to be released this year. Einhorn’s original plays include Rudolf II and Golem Stories. Einhorn has directed or had plays produced at The New Ohio, The Brick Theatre, Columbia University, Lincoln Center, The Bohemian National Hall, Pangea Cabaret, The Center for Jewish History, The Czech Embassy in Washington D.C., York Theatre, Goodnough College (in London) and Chashama Theatre. In 2006, he curated the Vaclav Havel Festival, a festival of all of Havel’s work, which Havel himself attended. The New York Times has called Einhorn’s work “exquisitely ingenious”, “dramatically shrewd,” and “almost unbearably funny”; Time Out has called it “challenging, thought-provoking,” “mesmerizing,” and “startlingly intense”; and The Village Voice has called it “hilarious, provocative,” and “Inspired absurdist comedy”.  He has received a Sloan Grant, SEED Magazine’s Revolutionary Mind Award, The NY Innovative Theater Award for Best Performance Art Production of the Year, NYTheater.com’s Person of the Year Award and placement in their Indie Theater Hall of Fame, and Critic’s Picks in Time Out, The Village Voice, and The New York Times.

Petr Erbes (1991, Polička, Czech Republic) has co-authored various theatre productions including: DISK , Jatka78, Dejvické divadlo, Národní divadlo Brno. He is an active member of 8people. He studied Multimedia Technology at CTU and Alternative Dramaturgy and Puppet Theatre at the Theatre faculty of The Academy of Performing Arts in Prague (DAMU). He is interested in active role of audience in theatre; he explores game structures and naratives.

>> Free and open to the public. RSVP required. Read more and get your free ticket at Eventbrite.com.