I Hope I Wouldn’t Meet Myself Today by Herta Müller, Nobel Prize recipient, translated and directed by Simona Maicanescu

Based on the Nobel-laureate Herta Müller‘s grim novel with the same title about life in the oppressive years of communist Romania, ‘I Hope I Wouldn’t Meet Myself Today’ depicts the insidious terror, moral decay and personal redemption through the destiny of a young woman torn apart by the painful failure of an unhappy marriage, the humiliations of everyday life in a dictatorship and the harassments of which she is subjected by the feared Securitate. Unfolding as a long, tormented monologue by the heroine herself, the performance celebrates the inner strength and courage of an ordinary woman who refuses to surrender her dignity and hope in the most difficult circumstances. 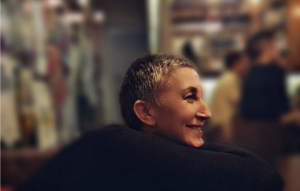 Simona Maicanescu is an actress who has performed in diverse rolls, including Viola in Twelfth Night and Solange in The Maids. She has worked in both Romania and France under directors Sanda Manu, Càtàlina Buzoianu, Silviu Purcàrete, Lucian Pintilie, Andrei Serban, Tompa Gabor, Sandu Dabija. She has recently branched out into a new realms as both playwright and translator with her adaptation of Herta Müller’s book I Hope I wouldn’t Meet Myself Today. She has a Masters degree from the Bucharest Academy of Arts.

Herta Müller is recipient of the Nobel Prize. The performance I Hope I Wouldn’t Meet Myself Today is a dramatization of her book which was translated into English with the title The Appointment. Müller’s story revolves around a Romanian worker who is terrorized by the Ceausescu`s Securitate. Müller read German studies and Romanian literature at Timisoara University. In 1976, she began working as a translator for an engineering company, but in 1979 was dismissed for her refusal to cooperate with the Securitate, the Communist regime’s secret police. Her first book was published in Romania (in German) in 1982, and appeared only in a censored version. In 1987, Müller left for Germany with her husband, novelist Richard Wagner. In 1995 Müller was awarded membership to the German Academy for Writing and Poetry.

Free and open to the public. Space is limited, on first come, first served basis. RSVP online at Eventbrite.com.

Rehearsal for Truth Theater Festival’s Spring Weekend is a showcase of emerging Czech, Hungarian, Polish, Romanian, and Slovak playwrights whose work reflects on current social and political issues. The plays have been translated into English and feature local New York performers and directors who will have the opportunity to try out these works onstage as part of the European Month of Culture. The program includes a full Romanian production as well.

Spring Weekend is organized by the Vaclav Havel Library Foundation (VHLF) and Bohemian Benevolent and Literary Association (BBLA), in collaboration with Consulate General of the Czech Republic in New York, Consulate General of the Slovak Republic in New York, the Polish Cultural Institute, the Romanian Cultural Institute, and Untitled Theater Company #61. The cultural institutions of these five countries collaborate with VHLF to select the plays as well as arrange trips for some of the chosen playwrights to New York City to participate in the rehearsals, stage reading performances, and discussions with the audience after the shows.