A selection of European stage readings in NYC
Bohemian National Hall, May 10 – 12, 2019 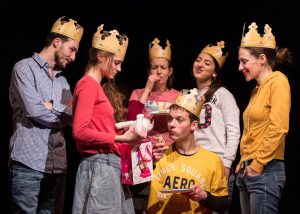 The playwright Andrea Pass will be present for the stage reading and talkback after the event. Her visit is supported, in part, by CITD – Center for International Theatre Development.

In Sunflower, a young couple with a dysfunctional marriage and illness taking over their lives, faces loosing their home. Familiar situations, and scenes from contemporary life, become a series of revealing snapshots through the eyes of adults as well as children.

The play is set in a small town and involves ordinary characters: the young idealist teacher, the friendly caretaker, three young teens, the handsome doctor, the hopeful shop assistant, the troubled woman in the psychiatric ward. They all bear witness to the story of this three-person family. The father and the 10-year-old, Janka, are trying to cope with the increasingly erratic behavior of the mother. Sunflower is a vibrant tableau of everyday life, vulnerable and burdened with financial problems, broken families, and taboos and shame surrounding mental illness.

Andrea Pass is a playwright and director. Her work deals with social issues while also exploring the human condition and the transformative power of theater. Her plays include Nothing Else Happened, New World, Sunflower, One Must Descend to Hell, Inside-out, The Silent Province, Hide-and-Peek, The Leader, The Hobo Dog and Crows. Pass’s plays have been produced or developed by a FÜGE, Lifeboat Unit, RÉV Theatre Education Company, PanoDrama and Vígszínház. She was awarded the prestigious István Örkény Playwrights Grant for young playwrights on two occasions as well as the Grand Prize at the 8th Youth and Children’s Theatre Showcase and the Special Award at the 8th Kaposvár Biennale. Pass has had three plays published, one of them recently in the Polish Dialog theatrical magazine. She graduated as a theater historian from the University of Veszprém, Hungary and spent time in Nancy and London on scholarships during her studies. She worked as an assistant to Béla Pintér and Viktor Bodó.

Adrian Alexander Alea is a creative director and producer based in NYC, passionate about exploring the human condition through story-telling and entertainment focused on diversity, community, and social justice in the commercial and non-profit industries of Theater, Live Events, and Music Videos. Currently, Adrian is producing and directing a staged musical adaptation in development of Cristina García’s award-winning novel Dreaming in Cuban (music and lyrics by IBEYI) and a TV mini-series in development called Los Chen written by Christina Quintana and featuring music and lyrics by Michelle J. Rodriguez. Alea’s recent projects include STAND by Caridad Svich (New Dramatists reading; featuring Daphne Rubin-Vega and Grace McLean; Dir.), Maria by Alberto Bonilla (The Secret Theater, Resonance Ensemble; Dir.), HERCULES (Disney Theatricals and The Public Theater’s Public Works; AD). He has directed Fucking A by Suzan-Lori Parks (Yale University), AUTOPSIA A UN COPO DE NIEVE by Luis Santillán (The Lark), and The Spanking Machine by Marga Gomez (Syracuse Stage, Solo Artist Residency) and was assistant Director in A Midsummer Night’s Dream (The Public Theater’s Shakespeare in the Park), Kill Move Paradise (National Black Theater), Venus (Signature Theatre), Alice By Heart (musical workshop at MCC), and The Odyssey (Public Works). Previously, he was a management associate for The Medina Company and Jennifer Lopez. Main projects: Jennifer Lopez’s Las Vegas Residency (All I Have) and “Ain’t Your Mama” music video. He holds a BA from Columbia University and MS from Northwestern University.

>> Free and open to the public. RSVP required. Read more and get your free ticket at Eventbrite