Audience centers on a meeting between brewery manager Sladek and employee Vanek. While the manager is clearly opening too many beers and inducing binge drinking, it is less clear what he wants from Vanek. Audience (1975) is the first of Vaclav Havel’s partly autobiographical one-act plays known as the “Vanek Trilogy” (followed by Protest (1978) and Mistake (1983)) based on his experience of being subject to forced work while under constant harassment from the Communist regime. Since the plays were banned in then-Czechoslovakia, they were performed in people’s living rooms and even recorded on vinyl.

The show will be performed in Czech with English supertitles. Talkback after the show will be with director/actor Jakub Spalek and actor Jan Potmesil, afterparty reception will take place at Bohemian National Hall’s Ballroom Bar.

Jakub Spalek (b. 1968) is an actor, theater director and producer. In the 1990s, he co-founded the theater company Kaspar. Spalek has directed over twenty plays and contributed to many other performances as a producer, actor and dramaturge. He also appeared in a number of films and TV shows in addition to Helena Trestikova’s documentaries Ten Years in Life of a Young Man (1999) and Life with Kaspar (2013). Spalek directs the Theatre in Celetna.

Tomas Karger (b.1964) is a theater, film and TV actor. In the 1990s he co-founded the theater company Kašpar. Karger has played the roles of Duncan and Malcolm in Macbeth, Dr. Straus in Flowers for Algernon, Captain Lebyadkin in Demons and Ragenau in Cyrano, which he performed in the Celetná Theater. In addition to acting, he also moderates historic and cultural events. In 2006 he was awarded the Kilcullen Wild Geese Award for the greatest contribution to Irish culture in the Czech Republic.

Jan Potmesil (b. 1966) is an actor who performs onstage and well as in films and TV shows. He has been wheelchair-bound ever since a 1989 car accident that occurred during a countrywide journey to promote the Velvet Revolution. Potmesil has excelled onstage while performing major characters in Kaspar plays, including Charlie Gordon in Flowers for Algernon, Jesus in Trouble in the House of God and Polonius in Hamlet. In 1996, Potmesil received the prestigious Thalia Award for a young theater actor and was given the Alfred Radok Award for the Best Actor in 2000 for personating Richard III in the eponymous play. Despite his handicap, Potmesil continues his long and successful acting career.

Vaclav Havel (1936-2011) was a playwright, essayist, political dissident and, after 1989, president of Czechoslovakia and the Czech Republic. His first full-length play performed in public, The Garden Party (1963), won him international acclaim. Soon after its premiere came his well-known The Memorandum (1965) along with The Increased Difficulty of Concentration (1968). In 1968, The Memorandum was brought to The Public Theater in New York, which helped to establish Havel’s name in the United States. During the repressive period that followed the 1968 Prague Spring, Communist authorities forbade the publication and performance of Havel’s works. Havel refused to be silenced and became an outspoken human rights advocate. He manifested his experience of working odd jobs into the so-called “Vanek Trilogy” (named after Ferdinand Vanek, a stand-in for Havel), and the three screenplays circulated in samizdat format throughout Czechoslovakia. Havel’s reputation as a leading dissident crystalized in January 1977 with the publication of the Charter 77, a Czechoslovak manifesto that called on the government to honor its human rights commitments under the Helsinki Accords. Havel was arrested many times throughout the remainder of Communism for alleged anti-state activities and sentenced to more than four years in prison. His seminal essay, The Power of the Powerless (1978), had profound impact on dissident and human rights movements worldwide.

Kaspar is an independent theater company founded in 1990 by Jakub Spalek. Since 1994, Kaspar has been stationed at Prague’s Theatre in Celetna (hence Kaspar Theatre in Celetna). The company has produced over 89 performances, including classical plays, such as Possessed by Dostoyevsky, Hamlet by Shakespeare and Bald Soprano by Ionesco, alongside screenplays by contemporary authors like Havel, Klimacek, Ives and Bauersima. English drama has also made its way to Kaspar, e.g. The Two of Us and Copenhagen by Michael Frayn, The Royal Hunt of the Sun by Peter Shaffer and Betrayal and Old Times by Harold Pinter. In addition to continuing its operations at Celetna, Kaspar opened Clubhouse, a venue that evokes the Communist-era tradition of “apartment theater” whereby banned plays were secretly staged at people’s homes. Under the slogan “we can’t get closer,” Clubhouse rotates twelve plays—one mainstay being Audience by Vaclav Havel. The events offered at Clubhouse are “the private pleasure and enjoyment” of Kaspar. 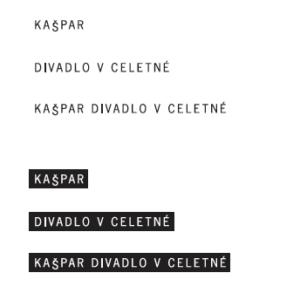 The 2019 Rehearsal for Truth Theater Festival explores the disappearance of borders between truth and lies. The festival consists of five international performances—three full plays, one dance performance and a behind-the-scene presentation—along with four special events. In total, the activities offer a notable occasion for adventure of the mind and conduits for shared encounters.

The festival examines different nuances of truth through its third edition, “The Travesty of Truth.” Conceived under the direction of Pavla Niklova, the 2019 Rehearsal for Truth program encourages participants to enter a dialogue on pressing matters that pervade our post-truth era.

“The time when boundary is blurred between truth and lie, theater holds the power to re-establish relationships between participants through a common engagement and common experience of truth,” states Niklova.