In Los Angeles, a $4,000,000 car roaring past hungry, homeless people is not a rare sight – for most people, it is simply a fact of life. We are a society in which the dichotomy of ultra-wealthy and absolutely-destitute is accepted, even to the brink of resenting poor and idolizing rich. 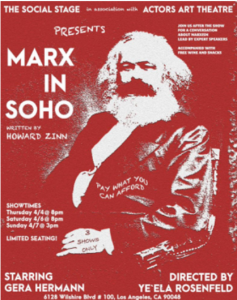 Radicalized and unchecked, Capitalism is effectively marginalizing entire populations. It’s easy to think of them as statistics, but for director Ye’ela Rosenfeld, their names matter.

Looking at the world through this lens, Rosenfeld believes Marx in Soho is more relevant now than ever – and is reviving it for a limited run at the Actors Art Theater in Mid-City.

In his play, Marx in Soho, Howard Zinn introduces us to Marx’s outlook on society and passion for change with wit, humor and gusto! Zinn, bestselling author of A People’s History of the United States, is an important American historian and playwright, and his writing offers a unique perspective on Marx’s life, and the simple ideas of Socialism.

As a writer and director, Ye’ela believes creative people have a responsibility to raise a voice for something bigger than themselves. This is what she set out to do with her new theater company, The Social Stage. The company aims to make important plays and active salon discussions led by expert speakers, accessible to everyone, regardless of class, income or education. In light of this agenda, it is easy to see why Rosenfeld has chosen Marx in Soho as their debut performance.

“Marx’s utopian ideas of social justice were hijacked, twisted and misrepresented. Through The Social Stage, I hope to shine a light on this, and many other crucial social issues”, says Rosenfeld.

Rosenfeld is an accomplished stage and screen director, known for her work with renowned director, Roman Polanski. Her show The Physicists premiered at the 2017 Hollywood Fringe Festival to reving reviews. Among others, she has put up LA productions of works by Vaclav Havel, Friedrich Durrenmatt and Jean Paul Sartre.

The Social Stage will operate on a pay-what-you-can model, with the goal of bringing quality theater and information to people of all means. Each show will be followed by a salon discussion, led by expert speakers. The debut play, Marx in Soho, will be performed by renowned theater actor, Gera Hermann, and followed by a discussion with UCLA and USC professors.