It’s really fascinating to witness a person’s experience of strife on stage: to take a something that is so inexplicable and unreasonable, it borders on the absurd. When the absurd then comes to be expected, leave it to a playwright’s imagination to bring together comedy and hardship – all with a political agenda in tow. 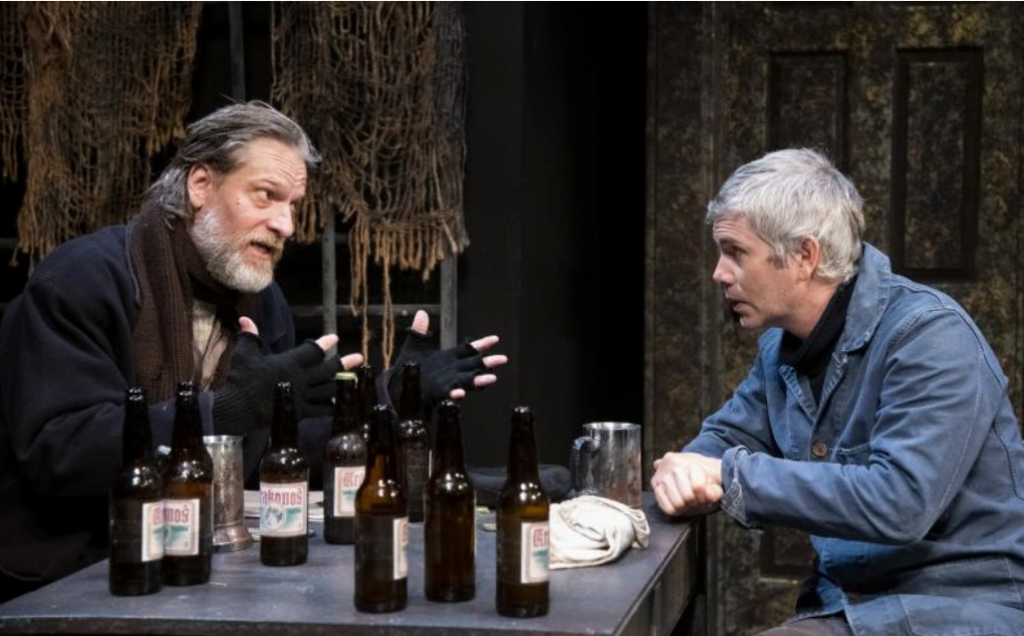 In an effort to free the self from suppression and be seen not as a pawn, but as one deserving of basic human rights, Vaclav Havel transformed his experience with the Czechoslovakian government into a work of art through the recurring character of Vanek. A representation of reason amidst a society bent on changing the way he chooses to live his life, Vanek encounters his opposition in many different forms, all which give away the notion that something is not quite right. Yet, if you try to figure out how these characters function in their deranged way of life, you would be mistaken in your efforts. Despite the show’s political undertone, the lack of any sort of rationale is funny – expectation is thrown to the dogs. In Potomac Theatre Project’s Havel: the Passion of Thought, Havel’s hero is joined by the likes of Samuel Beckett to show the progression of Havel from prisoner to activist, growing more succinct in the show’s message as we venture from beginning to end.

Directed by Richard Romagnoli and presented by PTP/NYC for a run at Atlantic Stage 2, Havel: the Passion of Thought has been delighting audiences since its July 9th start; it really is quite the addition to shape out the group’s thirty-third season. To enjoy the show requires little explanation (especially if you enjoy the chaos of things that make little sense), but to understand its significance requires a little backstory. In a time when artists were silenced in Czechoslovakia because of their efforts to bring attention to human suffering and value. They were arrested, their free speech squandered and rights evoked in the very fashion against which they protested.

The ingenious idea to place Havel’s Vanek Plays centered between Pinter’s The New World Order and Beckett’s Catastrophe does wonders to portray a political agenda that becomes more pronounced as humor gives way to the true nature of the matter at hand. It is the transformation from visceral animal (supposedly those people meant to be in power and “know better”) to the need for the audience to understand just how important it is for an individal to be given the right to his humanity.

The Czechoslovakian oppressed (portrayed through Vanek) are constantly being changed by those in charge, denied the right of free speech and meant to follow what the authority seems fit; indeed, we see Vanek not even get a word in edgewise as he attempt to explain his modest way of life. Even with the political nature, this show brought a smile to my face from the very start because of its absurd quality – how people “in power” are just rather poor excuses of what they are meant to represent, how situations repeat after a complete shutdown of the human form and how a molded creation is, at last, able to turn his head in defiance of all that he has been through. 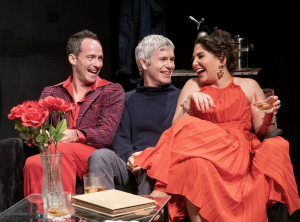 Havel: the Passion of Thought is such a clever combination of three plays meant to be both comical and progressive. We start with Pinter’s The New World Order, which begins (and ends) with two men standing tall before a seated man, his head covered and back turned to the audience. We discover that this man has been captured for his “philosophy talk” and thrown in jail. They speak of the sort of pain will soon be inflicted on their silent victim…or at least will most likely be inflicted, if it isn’t mostly just banter. Havel’s Vanek Plays follow suit, starting with Vanek entering the office of the brewmaster at his new place of employment. This drunken, beaten-down excuse of an authority figure sits with Vanek and makes it clear how great a favor he is doing for someone recently freed from jail; it is a risk to be taken, even though the greater risk is clearly this man who sits imbibing half a crate a beer in one sitting and who is insulted by Vanek’s “upper crust” attitude due to the ideas he speaks of (and therefore his lack thereof).

His rash, almost primal behavior gives way to the second scene, which shows a bit more sophisticated couple who welcomes Vanek into their newly remodeled home. Everything is picture perfect – from the couple themselves, to their remodeled home that features only the latest and greatest, they implore Vanek to sit down, have yet another drink and listen to the wisdom they have to impart on his mediocre lifestyle. Everything about their lives is “perfect,” and they make it of the utmost importance (even if to the point of being absurdly rude) to inform Vanek of everything he is doing wrong. Again, we witness the repetition of the scene before, as though a parent trying to placate a ebullient child with a bit more warning in his voice each time. Freedom of self is squashed by Michael and Vera, whose perfect life style is quite literally short-circuited and made a mockery of when Vanek informs them that he must get going. In a fit of unbridled rage, they can’t understand how Vanek believes that they do all of this for themselves – how could he think that their entertainment system and exotic foods are for their satisfaction?

The following scene takes a sharp turn and is a full-on, rational analysis of why an activist should or should not sign a petition (started by Vanek), demanding the freedom of an arrested pop singer. The gradually evolving human form ultimately takes shape in Beckett’s Catastrophe, a one-scene play that portrays a silent man being prodded and positioned in different ways to the director’s liking. Much like the first scene, he is now given the chance of free speech through a simple turn of the head – a message that is louder than any words could have expressed.

This show is so brilliant, telling a story that is progressive in both plot and theme. Absurdist plays are some of my favorite, and with a little bit of an existential twist, there really is something quite special about this production. In each circumstance Vanek finds himself in, he is oppressed. The simply act of being offered a drink he doesn’t want seems simple enough, until perpetually being told what to do (by people hardly better off than himself) becomes the norm. He is forced to drink, put up with the antics of his almost mechanically perfect friends and essentially providing people an outlet through which to express their true selves – ironic in light of the show’s political nature.

I enjoyed everything about this show – indeed, Beckett is one of my favorite playwrights, so watching him culminate an entire evening’s worth of absurdity was icing on the cake. Despite the show’s political nature, implicitly portraying Havel’s journey from playwright to prisoner and ultimately president of Czechoslovakia, it is so fascinating to watch characters who are supposed to be better off move through life with the readily available option to push the reset button on what just happened. Words and scenes are repeated and the absurdity accepted, all the while leaving Vanek a strong pillar in the midst of gradual destruction and privy to what is happening around him – he plays along, almost doing his duty ini moving past each stage of lunacy until he is where he ought to be. From the versatility of such a small cast, to how beautifully this show combines the two very different themes of oppression and comedy, it is truly a success of a production that required such thought and panache to put into action.