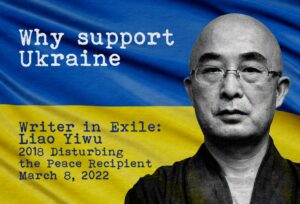 Many innocent people have died, and many more will die, be injured, be maimed, will flee and will be displaced – all because of the “imperial dream” of Putin, a madman, and a madman like Putin, Xi Jinping, who also has an “imperial dream.”

Putin and Xi Jinping, two of the world’s greatest villains, met as comrades in arms at the opening ceremony of the Beijing Winter Olympics, under the spotlight of the international community. They formed a demonic alliance: a joint declaration of “no no-go zones” between Russia and China, the latest fascist Axis alliance – Putin received more than 100 billion dollars in orders from Xi Jinping and agreed that Russia’s war of aggression would start as soon as China’s Olympics were over.

On February 24, 2022, the day the war started, Xi Jinping urgently summoned his foreign, national security, commerce ministers, and top military generals to order aid to Russia. To ease the crisis of Russia’s removal from the US dollar international settlement system SWIFT, China accepted Russia’s participation in the RMB settlement system and major Russian companies opened accounts with Chinese financial institutions. For more than half a month after the invasion, the Russian-Chinese “wartime air corridor” has been unimpeded, with large cargo planes to Russia filling the tarmac at Beijing airport. In support of Russia’s invasion of Ukraine, the Chinese government also completely eliminated anti-war voices in the country, even blocking the President of the International Paralympic Committee from delivering an anti-war speech at the opening ceremony of the Paralympic Games.

Therefore, I strongly condemn the dictator Putin for kidnapping the entire Russian people and waging an aggressive war against Ukraine! This is the largest “regional invasion” since World War II. It is likely to trigger World War III.

If Putin wins, Xi Jinping will imitate Putin and launch a war of aggression against Taiwan! This would be many times more cruel than killing the freedom of Hong Kong!

Politicians, military, entrepreneurs, scientists, and ordinary citizens of democratic countries, if you remember the names of dictators like Lenin, Hitler, Stalin, Mao, and Pol Pot, who caused the deaths of millions, tens of millions, and hundreds of millions of innocent civilians, remember that Putin and Xi Jinping are also such dictators, and they are causing similar catastrophes.

We have experienced and are experiencing viral aggression and war aggression, and we cannot retreat!

To support Ukraine is to protect ourselves.