We are delighted to announce that the winner of the 2019 Vaclav Havel Library Foundation’s playwriting competition is Ellis Stump! Ellis is a 2019 graduate of Penn State Schreyer Honors College where she majored in English and Media Studies (Film), minored in Gender Studies, Psychology, and Theatre, and received the Donald P. Bellisario Communications Fellowship and the Paterno Writing Fellowship. She is currently a full-time screenwriter at Inkitt Galatea, headquartered in Berlin (one of three cities where she studied abroad) and is preparing to attend Pace University in NYC for her Dramatic Writing MFA this fall. Her full-length play The Only Coffee Shop in the City also makes its New York debut in October.

The jury members included:
Marcy Arlin, the founder of the OBIE-winning Immigrants’ Theatre Project. Shehas taught theatre at Yale, Brown, CUNY, U. of Chicago, Pace, and many universities in Eastern Europe. She was a Fulbright scholar to Romania and the Czech Republic.
Edward Einhor, a playwright, director, translator, librettist, and novelist.  He is the Artistic Director of Untitled Theater Company No. 61: A Theater of Ideas, which has been performing in New York City for 25 years.
Jakub Skorpil, a translator, and a non-professional actor and director. Since 2001 he has edited the theatre journal Svet a Divadlo (World and Theatre). 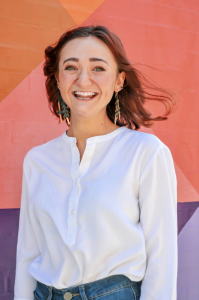 This year, contestants submitted short dramas based on the theme of “Ferdinand Vanek Today.” The plays used Vaclav Havel’s recurring character, Ferdinand Vanek, to explore the modern societal landscape. Our judges evaluated each entry based on creativity, thought-provoking story, understanding of the role of the character Ferdinand Vanek and the original way of applying it to current society as well as other common criteria such as clear structure and organization of the play and its effect on the audience. As the winner, Ellis will receive a two-week residency in Prague with classes at different departments at the Academy of Performing Arts (DAMU); visits to Prague theatres; a stage reading of the winning play prepared by DAMU and the Vaclav Havel Library in Prague; a round-trip air ticket to Prague and accommodation. The schedule at DAMU will be prepared individually according to the winner’s study focus and interests. You can view Ellis Stump’s winning play The People’s Toast here.