A statue of first Czech President Vaclav Havel was unveiled in the Georgian capital of Tbilisi.

The statue was unveiled by Georgian President Giorgi Margvelashvili and Czech Defence Minister Martin Stropnicky, who is on his first official visit to Georgia, today.

Margvelashvili said that the opening of the statue is an important message stressing that the values which Havel fought for are still important in politics today.

Havel’s life was a clear example for Georgian and Czech politicians that politics can be based on values,

Margvelashvili said.
He added that Havel’s life proves the saying “politics is a dirty business” wrong. 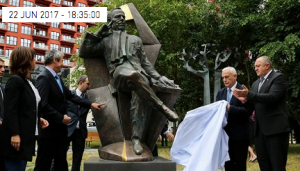 In Margvelashvili’s words, the opposite is true – politicians must be honest and have their hands clean.

Havel was a writer and dissident whose eloquent dissections of Communist rule helped to destroy the system through peaceful revolutions that brought down the Berlin Wall and swept Havel himself into power in Czechoslovakia. He died in 2011, at age 75.