Prisoners of conscience Phyoe Phyoe Aung and her husband Lin Htet Naing were released on April, 8 along with other protesters who had been arrested in Myanmar for their activism. 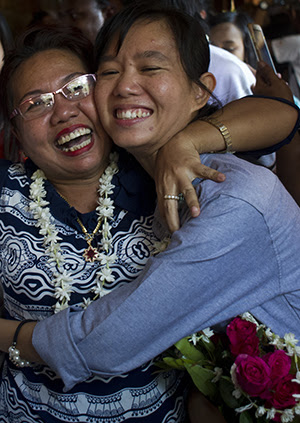 The detention of Phyoe Phyoe Aung (on the right in the picture) followed nationwide student protests, which started in 2014 and ended with the beating of students by police in Letpadan in March 2015. Scores of students and their supporters were arrested and detained throughout the country.

Finally, the demand for their freedom has been heard, and alongside many others, Phyoe Phyoe Aung and her husband now walk free.

While this is a step in the right direction, the government of Myanmar must release all remaining prisoners of conscience and ensure wholesale reform so that the country can end the cycle of discrimination, politically motivated arrests and imprisonment, and other human rights abuses once and for all.

Phyoe Phyoe Aung and other human rights defenders are vital to shaping the country’s future—it’s crucial that the government works to create space in civil society for them to operate freely.

With the world’s attention on Myanmar, we will celebrate the release of the protesters and challenge the Myanmar government to break away from the deeply repressive policies that for years have fueled arbitrary arrests and repression.