Vaclav Havel Library Foundation is pleased that Write for Rights found such a success this year and was happy to help innocent people find justice and freedom.

Every year, around Human Rights Day on December 10th, hundreds of thousands of people around the world write letters and send email messages to help people they’ve never met. Letter writing has always been at the core of Amnesty’s work, and 54 years of human rights activism show that letters really do have the power to change lives.

During Write for Rights 2015, Amnesty activists from all around the world came together with one voice. Together, they sent a record-breaking 3.7 million actions against injustice.

Because of all the action, our global movement was able to mobilize hundreds of thousands of people to speak out against human rights abuses—and our voices were heard.

These are some of the people who found justice: 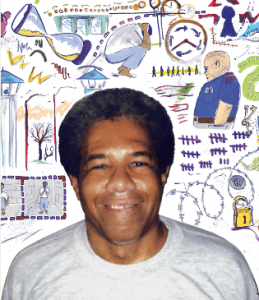 Albert Woodfox was released in February, 44 years after he was first placed in solitary confinement in Louisiana. He wanted to tell Amnesty activists: “Your messages from beyond the prison walls have become an enormous source of strength for me. I would like to thank all of the members of Amnesty International and its supporters for all of the wonderful work they are doing on our behalf.” You called for his release.

Phyoe Phyoe Aung is now free after being imprisoned in Myanmar for organizing a largely peaceful protest as a student leader. She told us: “Receiving letters gives me real inspiration for what we are doing. I have begun to notice that the world is watching and cheering us—we are not alone.” Your voice helped turn the eyes of the world to her case, pressuring the Myanmar government to release her. 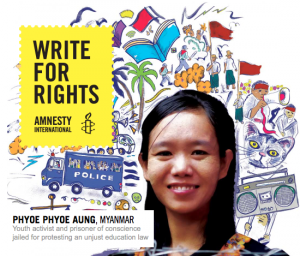 Burkina Faso’s government announced in February that it is committed to eradicating early and forced marriage. Authorities stated that they felt compelled to act after “receiving letters, emails and correspondence from people all over the world.”

By taking part in Write for Rights, people’s lives change. Costas, who along with his partner was badly beaten in a violent homophobic and racist attack in Athens, Greece, said:

“I am so moved, and I thank you from the depth of my heart—every single person, woman, man or else, that wrote even half a line and contributed to this campaign. Thank you, Amnesty, for bringing light into the darkness.”