September 8, 2016 /
FOR IMMEDIATE RELEASE:
NEW YORK – The Vaclav Havel Library Foundation will honor Burmese writer Ma Thida with its first annual Disturbing the Peace award at a ceremony at the Bohemian National Hall in New York on September 28. 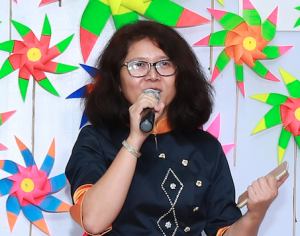 The Vaclav Havel Library Foundation’s Disturbing the Peace Award provides support to an outstanding writer who shares the humanitarian values of the first president of the Czech Republic, Vaclav Havel, and has suffered unjust persecution because of his or her beliefs. The award is accompanied by a $5,000 cash prize.

Ma Thida is one of Burma’s leading intellectuals, who was sentenced to twenty years in prison in 1993 after supporting opposition leader and Nobel laureate Aung San Suu Kyi during the country’s repressive military regime. After nearly six years in prison, she was released on “humanitarian grounds” because of poor health. Since then Ma Thida has continued to advocate forcefully for civilian democratic rule and human rights in Burma, including the rights of the persecuted Muslim Rohingya minority.

“Ma Thida stands out as a leader of strong principles,” jurors Slavenka Drakulic, Alex Zucker, and Rose Styron wrote in their citation for the award. “By using her gifts as a writer not just to survive under degrading conditions, but to help others as well, she shows the spirit of courage, resilience, and dignity that the name Vaclav Havel represents.”
Ma Thida, who has also published under the name Suragamika, is best known for her documentary novel The Roadmap, published in 2011.

The award will be presented to Ma Thida by Timothy Garton Ash of Oxford University during a celebration honoring Vaclav Havel’s eightieth birthday at the Bohemian National Hall in New York. The day of the ceremony, September 28, will be declared Vaclav Havel Day by New York City Mayor Bill de Blasio, with a proclamation presented by Penny Abeywardena, Commissioner, Mayor’s Office for International Affairs.

The Vaclav Havel Library Foundation is a nonprofit organization established in the United States to honor, preserve, and build upon the legacy of Vaclav Havel. Vaclav Havel (1936-2011) was a playwright, essayist, political dissident, and president of Czechoslovakia and the Czech Republic. He was deeply dedicated to the cause of human rights, and his writings continue to inspire writers and human rights activists throughout the world.

The travel of Ma Thida to New York is supported by East Central European Center at Columbia University.