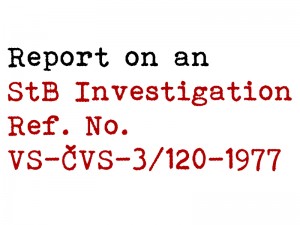 On January 6, we commemorate the 39th anniversary of the release of Charter 77. The Charter 77 was a human rights document that revealed Czechoslovakian government’s violations of human and civil rights that were included in the Helsinki Accords signed by the government in 1975. The document became known internationally and initiated a dissident movement that was active until the Velvet Revolution in 1989.

with pages of evidentiary material seized January 7, 1977, during a house search at the domicile of:
PETRÁNEK, Jan: 35 Jičínská St., Prague 3
1.Typeface test material taken from a Consul typewriter, Serial no. 7221032862

SUSPECT MATERIAL
2. A typed carbon copy of the Declaration of Charter 77, dated January 1, 1977, four copies with a total of 16 (sixteen) pages.
According to a statement given by the above named, he received a copy of Charter 77 from JIŘÍ HÁJEK, and subsequently, on his own typewriter and for, he claims, his own use, he made 4 or 5 copies of the above mentioned Chara [sic] 77.
See Deposition, Ref. No. D 1
3. Typed carbon copies with the title DECLARATION OF CHARTER 77, from January 1, 1977; three copies, a total of 12 (twelve) pages.
According to a statement given by the above mentioned, from the original Charter he received he made a translation into English, and transcribed it in English on his own typewriter.
See Deposition, Ref. No. D 2
ADDENDUM
— one portable Consul typewriter, in carrying case, Serial no. 7221032862