Slovakia’s newly installed liberal president, Zuzana Čaputová, has arrived in the Czech Republic on an official visit that will culminate in a symbolic visit to the grave of Václav Havel, the former dissident who was the first post-communist leader of the former Czechoslovakia. 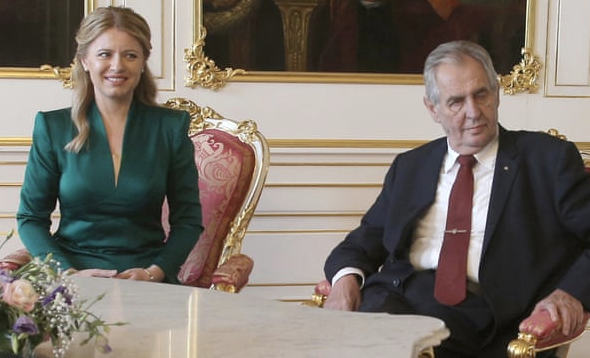 Čaputová lay flowers at the Havel family plot in Prague’s Vinohrady cemetery in a mark of respect to a man she has identified as a role model and a statement of her own self-avowed values of tolerance and decency. Havel led the protests that resulted in the fall of the communist regime in the 1989 Velvet Revolution.

The wreath-laying event came after she was greeted at Prague Castle by Miloš Zeman, the populist Czech president whose controversially outspoken views are seen as the polar opposite of what his new Slovak counterpart represents.

The two leaders exchanged friendly words but appeared ill at ease as a brass band played during a welcome ceremony attended by senior Czech politicians and other dignitaries.

There were fears beforehand that the meeting might be marred by Zeman’s penchant for politically insensitive and sometimes sexist remarks.

The visit followed a convention established after the 1993 dissolution of Czechoslovakia into the separate states of the Czech Republic and Slovakia that the presidents of each country should call on the other as their first trip abroad.

But the visit of Čaputová, five days after her inauguration last Saturday, carried added piquancy because her political outlook is so at odds with Zeman’s. It also came as liberal activists were preparing to stage what they promise will be the biggest protest rally yet this Sunday against Andrej Babiš, the Czech prime minister and Zeman’s political ally who has faced a series of demonstrations demanding his resignation over perceived corruption and conflicts of interest.

Čaputová was not scheduled to meet Babiš, who was in Brussels for a European council meeting.

By visiting the grave of Havel, however, she appeared to be drawing explicit attention to the contrast between current Czech politics and her election in March, which followed a wave of popular protests in Slovakia over the murder last year of Ján Kuciak, a journalist who was investigating corruption, and his fiancee.

Čaputová was greeted by a small number of Czech well-wishers at Havel’s grave, some waving Slovak flags, with whom she briefly chatted afterwards and posed for selfies. The group all repeated “yes” in unison when asked if they wished Čaputová was president of the Czech Republic.

Analysts and political activists say Čaputová – a lawyer who came to public attention by successfully leading the fight against an illegal landfill site in Slovakia – is seen as a ray of hope by many Czechs, who despair at the state of local politics but bemoan a lack of alternatives.

“It’s an inspiration for us to see that in Slovakia civil society can work to create not just a new party but to win a presidential election,” said Benjamin Roll, deputy leader of the Million Moments for Democracy movement that has organised the anti-Babiš rallies. “There was a lot of sadness last year that Miloš Zeman was re-elected despite all he had done. Now these people look at Slovakia and see some hope that we can find someone like Čaputová in the next presidential election.”

Jiří Pehe, director of New York University in Prague and a Czech political analyst, said many Czech people were “projecting their political aspirations” on to Čaputová. “I see a lot of people on social media who would not be typical fans of Václav Havel but who are unhappy with the current president and say openly that they would be happy if someone like her became president here,” he said.

In an interview with the Guardian this year, Čaputová identified Havel – who died in 2011 and became the first president of the Czech Republic after Czechoslovakia’s breakup – as one of her political heroes. “I consider Václav Havel to be one of the most inspiring political leaders, specifically in that authenticity that he exuded,” she said.

Michael Žantovský, director of the Václav Havel library and author of a biography of the late leader, said Čaputová was an apt successor. “Her visit is symbolic because Havel had always expressed hope that his successor might be a woman,” he said. “I believe she is a worthy representative of his values.”

… we have a small favour to ask. More people are reading and supporting The Guardian’s independent, investigative journalism than ever before. And unlike many new organisations, we have chosen an approach that allows us to keep our journalism accessible to all, regardless of where they live or what they can afford. But we need your ongoing support to keep working as we do.

The Guardian will engage with the most critical issues of our time – from the escalating climate catastrophe to widespread inequality to the influence of big tech on our lives. At a time when factual information is a necessity, we believe that each of us, around the world, deserves access to accurate reporting with integrity at its heart.

Our editorial independence means we set our own agenda and voice our own opinions. Guardian journalism is free from commercial and political bias and not influenced by billionaire owners or shareholders. This means we can give a voice to those less heard, explore where others turn away, and rigorously challenge those in power.

We need your support to keep delivering quality journalism, to maintain our openness and to protect our precious independence. Every reader contribution, big or small, is so valuable.