The Council of Europe has awarded its 2020 Václav Havel Human Rights prize to Loujain al-Hathloul. 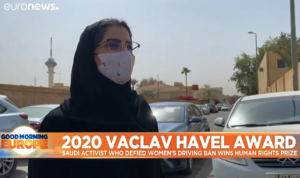 The Saudi activist pushed to end a ban on women driving in Saudi Arabia, but was arrested in 2018 and sentenced to almost six years in prison last December under a broad counterterrorism law.

Her sister Lina al-Hathloul accepted the award on her behalf.

“Loujain cannot be present because, although she has been released from prison, she is still silenced inside of the country,” al-Hathloul said.

She said her sister spent 1,001 days in prison as a sacrifice for “a better life for Saudi women.

“Because of her activism, Loujain was kidnapped, deprived of finishing her studies, illegally imprisoned, brutally tortured, put in solitary confinement for months and now, sentenced as a terrorist,” her sister said.

Loujain al-Hathloul was among an all female line up of prize finalists.

A group of Buddhist nuns promoting gender equality in the Himalayas and human rights activist Julienne Lusenge from the Democratic Republic of Congo were runners up.