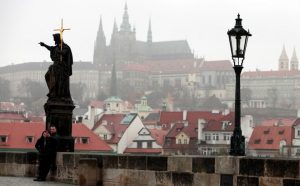 “May this bell with its tones call the living to promote civil and human rights, humanism and freedom,” Havel’s widow, Dagmar Havlova, told a crowd outside the church, whose name translates into “Havel” in Czech.

“May its tones mourn the dead so that no one who has paid for our freedom will be forgotten,” she said.

Havel, a playwright turned anti-communist dissident, steered his compatriots through the bloodless 1989 revolution that toppled Soviet-backed communism in Czechoslovakia.

The bell, christened “Vaclav”, was made in December at the Grassmayr foundry in Innsbruck, Austria, where Havel underwent a life-saving surgery operation in 1998.

Financed from a public collection, the bell will replace bells that were confiscated during World Wars I and II.

Yesterday, it was consecrated by the Prague archbishop, Dominik Duka, at St Vitus Cathedral at the Prague Castle.

Duka and Havel first met as prisoners in a communist jail in 1981.

The bell was then taken on a horse-drawn cart through Prague’s historic centre to St Gallus. — AFP