A group of politicians and intellectuals from Europe and the United States have nominated the jailed philanthropist and businessman Osman Kavala, one of the most prominent human rights defenders and civil society activists in Turkey, for the Vaclav Havel Human Rights Prize. 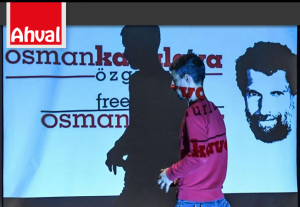 Kavala was detained on October 18, 2017 over charges of attempting to overthrow the government, and remains in prison over charges of espionage that were brought after he was acquitted in the first case against him, the so-called Gezi Trial.

As of Friday, Kavala will have spent 961 days in prison.

The group that nominated Kavala for the Václav Havel Human Rights Prize, given by the Parliamentary Assembly of the Council of Europe in partnership with the Václav Havel Library and the Charta 77 Foundation, includes linguist Noam Chomsky and philosopher Étienne Balibar, as well as Dimitris Papadimoulis, Vice President of the European Parliament.

Dimitris Papadimoulis issued a statement announcing his nomination of Kavala, and said the Turkish philanthropist was “one of the thousands of political prisoners in (Turkish President Recep Tayyip Erdoğan’s) regime.”

Kavala “is a symbol of the systematic oppression that has been orchestrated against civil society in Turkey, especially after the attempted military coup in 2016,” Papadimoulis said, adding that Kavala “has contributed, among other things, to the creation of numerous non-governmental organisations working to promote and protect human rights.”

Nominees to the prize are individuals involved with civil society, or civil society organisations, who have significantly contributed to the human rights standing for groups of people, been effective in uncovering systemic violations of human rights, and/or successfully mobilised the public at a national or international level towards a human rights-related goal.

The prize will be given out on October 12 this year in Strasbourg. Previous winners since 2013 have been Ales Bialiatski (Belarus), Anar Mammadli (Azerbaijan), Ludmilla Alexeeva (Russia), Nadia Murad (Iraq), Murat Arslan (Turkey), and Oyub Titiev (Russia).

Ilham Tohti, a Uighur intellectual who was sentenced to life imprisonment in China, and the Youth Initiative for Human Rights, which promotes reconciliation in the Balkans, shared the prize most recently in 2019.

As Kavala’s nomination was officially recognised, Western efforts for his release and the dismissal of charges against him are accelerating.

The joint appeal urged the CoE Committee of Ministers, which is responsible for the enforcement of ECHR rulings, to call on Ankara for Kavala’s release. It also demands that the CoE state that Kavala’s continued arrest violates Article 46 of the European Convention on Human Rights and stress that his release has become even more urgent during the COVID-19 pandemic, while also demanding that the Turkish government ensure the dismissal of all charges against Kavala.

“The European Court ruled that Kavala’s detention is unlawful, and their binding judgment requires Turkey to release him immediately,” HRW Turkey Director Emma Sinclair-Webb said. “The Committee of Ministers, at its June 4 meeting, should press Turkey to comply and issue a clear message that no Council of Europe member state should be silencing human rights defenders.”

“There has been a concerted official effort to prevent Kavala’s release,” Pillay continued. “Since the European Court’s judgment, Turkey has continued to violate Kavala’s human rights.”

Meanwhile, renowned artists, politicians and civil society activists in Germany have launched a social media campaign calling for one-minute-long videos from social media users, asking “What did Kavala do?”, as an initiative to highlight Kavala’s contributions to culture, civil society, and social peace, and to raise awareness of his ongoing incarceration.

Vaclav Havel Library Foundation · 9 hours ago
@HavelLibrary
Timothy Snyder, our guest in #HavelConversations, remembers from the era of dealing with former dissidents who became politicians that they didn't like to wear ties.😉 His amazing lecture "Twenty Lessons from the 20th Century" is on YouTube: https://t.co/SpjJLWLQh3.
#VaclavHavel https://t.co/MkdhjQDeH7
View on Twitter
0
4

Vaclav Havel Library Foundation · 4 days ago
@HavelLibrary
Havel Conversations resume in February. Let’s continue the debate over some of the most profound issues facing the global #community: #freedom, #humanrights, and global citizenship. ✌️