Milos Forman, winner of Best Director Oscars for both One Flew Over the Cuckoo’s Nest and Amadeus, has died, Czech press agency CTK reported. 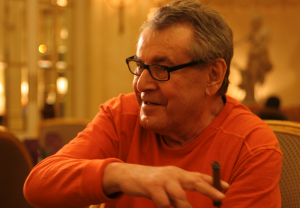 The Czech-born filmmaker, who left his native country in 1968 in the wake of the Prague Spring, was 86.

“He died peacefully, surrounded by his family and loved ones,” Forman’s widow Martina told CTK on Saturday.

Born east of Prague in the town of Caslav in 1932, Forman spent summers at a lake hotel operated by his family until he was 8 years old, when the Gestapo arrested his father. The son of Czech partisans — both his father and his mother were killed in the Nazi concentration camps of Buchenwald and Auschwitz, respectively — he studied at the Bohemian Boarding School in Podebrady. One of his earliest friends there was Vaclav Havel, the playwright who later became the first president of the Czech Republic.

After studying filmmaking, Forman rose to prominence during the Czechoslovak New Wave in the 1960s, as comedies Loves of a Blonde and The Fireman’s Ball brought international attention.

When Warsaw Pact troops crushed the liberal Czech government in 1968, Forman decided to remain in the U.S., where he was directing his first Hollywood film, a comedy ironically titled Taking Off.

“I tell you,” he explained to PEOPLE in 1984, “I was almost certain I’d never see Czechoslovakia again.”

After Taking Off successfully demonstrated that his light satiric style could translate overseas (it was a surprise Jury Prize winner at Cannes in 1971), Forman was tapped by producer Michael Douglas to helm Ken Kesey’s novel One Flew Over The Cuckoo’s Nest.

The film — which had been a Douglas family project since its pre-publication rights had been purchased by Kirk Douglas in 1961 — earned five Oscars, including Best Picture, Best Actor for Jack Nicholson and Best Actress for Louise Fletcher. The major categories sweep made Forma an instant and sought-after Hollywood player with a reputation for being able to bring to the screen projects that frustrated other directors.

After becoming a U.S. citizen in 1977, Forman dramatically returned to Czechoslavakia — still under Communist rule — to shoot scenes for Amadeus, including opera sequences at the same theater where Wolfgang Amadeus Mozart had premiered Don Giovanni 200 years earlier.

“In Prague, he was a god,” Forman reflected. “He wrote Don Giovanni for the citizens there, thanking them for their acceptance of The Marriage of Figaro. We in Prague feel that Mozart is ours, so filming in Prague was a zinger to Vienna. I’m sure this subconsciously helped us to get approval to film there.”

Forman was recently featured in Jim & Andy: The Great Beyond, Jim Carrey’s Netflix documentary about playing Andy Kaufman in Man on the Moon.