The death of writer, activist, and Nobel laureate Liu Xiaobo, in Chinese government custody, would be tragic at any time, but comes as a particularly rough blow at a time when human rights norms are under attack and when his own country seems farther than ever from the democratic future he imagined for it. 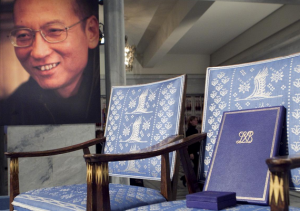 Liu, who had been in prison since 2008, was 61 and died of liver cancer in a hospital in the northern city of Shenyang. He had been granted a medical parole last month, and his wife and friends had advocated in vain for him to be allowed to travel abroad to receive treatment. The recipient of the 2010 Nobel Peace Prize is now the first Nobel laureate to die in state custody since pacifist Carl von Ossietzky in Nazi Germany in 1938.

Liu started his career as a literary critic known for his aggressive, bordering-on-abrasive style. In 1989, he returned to China from studies at Columbia University to participate in the Tiananmen Square protests. After that, he became increasingly involved in political activism and opposition to the ruling Communist Party, earning him several stints in prison and labor camps.

He is best known as one of the main authors of Charter 08, a statement signed in 2008 by hundreds of Chinese intellectuals and activists demanding democracy and the end of one-party rule. It was the charter that resulted in Liu’s most recent arrest and got him sentenced to 11 years in prison for subversion.

The charter was explicitly modeled on Charter 77, the statement adopted three decades earlier by Vaclav Havel and other activists in Czechoslovakia against Soviet Communism and was a startlingly brave thing to put one’s name on in a country like China. After noting the impending anniversaries of both the Universal Declaration of Human Right and the Tiananmen Square protests, it reads:

The Chinese people, who have endured human rights disasters and uncountable struggles across these same years, now include many who see clearly that freedom, equality, and human rights are universal values of humankind and that democracy and constitutional government are the fundamental framework for protecting these values.

By departing from these values, the Chinese government’s approach to “modernization” has proven disastrous. It has stripped people of their rights, destroyed their dignity, and corrupted normal human intercourse. So we ask: Where is China headed in the twenty-first century? Will it continue with “modernization” under authoritarian rule, or will it embrace universal human values, join the mainstream of civilized nations, and build a democratic system? There can be no avoiding these questions.

It goes on to demand a new constitution that includes the separation of powers, elected government, and protections for human rights. It ends on a note of optimism:

Together we can work for major changes in Chinese society and for the rapid establishment of a free, democratic, and constitutional country. We can bring to reality the goals and ideals that our people have incessantly been seeking for more than a hundred years, and can bring a brilliant new chapter to Chinese civilization.

Nearly a decade and trillions of dollars in GDP growth later, it’s become pretty clear that Chinese civilization’s next chapter is not going to be the one the charter’s authors had in mind. Under President Xi Jinping, China has become more authoritarian, and more centralized, cracking down on opponents even outside the country’s borders.
The world has changed as well. Noting the nation’s permanent membership in the U.N. Security Council, the charter casts China as a rogue outsider, arguing that it is the “only country among the major nations that remains mired in authoritarian politics” and suggesting that it must embrace democracy before it can take its rightful place on the world stage. Today, Vladimir Putin’s Russia has made a mockery of that notion, not to mention a U.S. president who subverts the rule of law at home, has contempt for human rights abroad, and goes out of his way to praise authoritarian leaders, including Xi. We even now have a bizarre situation where, with the U.S. retreating from global leadership, China is being touted by many as the most reliable future guarantor of a stable, liberal (in the economic sense, anyway) world order. Xi certainly would like us to see it that way. Liu’s death ought to be a reminder of what’s wrong with that notion.
Liu will never get to emerge from prison triumphant, like Havel, Nelson Mandela, or Aung San Suu Kyi before him, to lead a transformed society. Though conversely, his death in custody will allow him to remain an unsullied symbol of freedom, never confronted—as those figures were to varying degrees and results—by the messy realities of governing flawed countries that could never live up to the samizdat dreams of dissidents decades earlier.