Madeleine Albright, once considered the most influential woman in the world, has died at the age of 84. She fled her native Czechoslovakia as a child from the Nazis during the Second World War, and later fled a second time from the Communists to the USA. In 1997, she became the first woman ever to lead the US State Department and, until then, the highest-ranking female politician in American history. 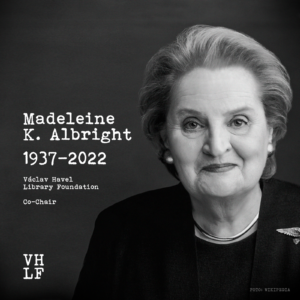 Secretary Albright devoted her voice and energy to supporting democracy and human rights in the course of an unparalleled diplomatic career. She embodied the inspiring example of great professional success joined to a willing acceptance of responsibility for state of the world. She played an irreplaceable role in assisting the Czech Republic with re-joining the western democracies in the 1990s.

Madeleine Albright first met Václav Havel on a visit to Prague in 1990. She was previously familiar with his writing, which she called “monumental,” and his activities as a dissident, which had made her proud of “this incredible man who personified… everything I thought about the country I came from.” The pair struck up an enduring friendship, which Albright referred to as an honor “beyond my imagination.”