Wednesday is the 20th anniversary of the launch of Radio Free Europe broadcasts from Prague. The US-funded symbol of the Cold War had moved to the city’s former communist parliament building at the invitation of President Václav Havel, who was keen to reinforce the Czech Republic’s new ties with the West. 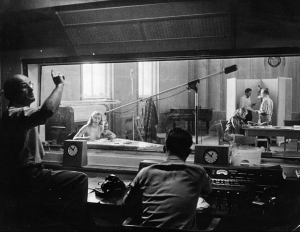 During the Cold War many people in Czechoslovakia and elsewhere in the Eastern Bloc tuned in illicitly to Radio Free Europe, an originally CIA-funded station that broadcast across the Iron Curtain from then West Germany.

Speaking last year, former RFE president Kevin Klose recalled that the fall of communism in Eastern Europe had left the US station looking for a new role.

“It had been in Munich from the 1950s on and the Wall had come down. It was clear as integration occurred between East and West that the radios really needed to move into the region. President Havel sent a letter to President Clinton and invited the radios in, early in President Clinton’s first year in the White House, in 1993. As we know, President Havel had the former parliamentary building in mind. When we got approval from the Clinton administration to do it, we made the move very quickly.”

Mr. Klose said Václav Havel had told him that having Radio Free Europe in Prague was equivalent to having three NATO divisions.

Mr. Havel clearly saw the move as a major step on the path to the country becoming an integral part of the Western community.

“It is a great expression of trust in the Czech Republic. Prague will to a certain degree be a symbol of that message of freedom disseminated to the world. This clearly accentuates the fact that we belong to the world of Western democracy, to that circle of civilisation.”

Among the hundreds of RFE staff who also made the eastwards move from Munich to Prague was the Czech journalist Jefim Fištejn.

“For me and many of my colleagues it represented the fulfillment of our wishes and ideas. I took it as a ‘return to the known’. I felt indebted to the Czech people… The population did not have a shortage of information but things needed to be explained to them. RFE functioned something like an underground university – explaining how free societies and their components worked.”

A Czech language version of the station was also set up in Prague and broadcast until the early 2000s.

Following the 9/11 attacks concrete barriers and armoured vehicles were placed in front of the Radio Free Europe/Radio Liberty building in central Prague. A high-security new HQ was opened in the suburbs seven years later.

Today the station broadcasts in 28 languages to 21 states. Most are in Asia, but RFE/RL continues to target a small number of European countries, including Belarus and Ukraine.