Astorka Korzo ́90 Theatre will be presenting their production of Eve of Retirement/ Pred Odchodom na Odpocinok at The Rehearsal for Truth theater festival in honor of Vaclav Havel. The festival takes place from 25 -30 September at The Bohemian National Hall and is presented by The Vaclav Havel Library Foundation and The Bohemian Benevolent & Literary Association. This Slovak play will be performed on Friday, September 28, 2018 at 7:30pm. We spoke lead actress, Zuzana Kronerova about her role in the production. 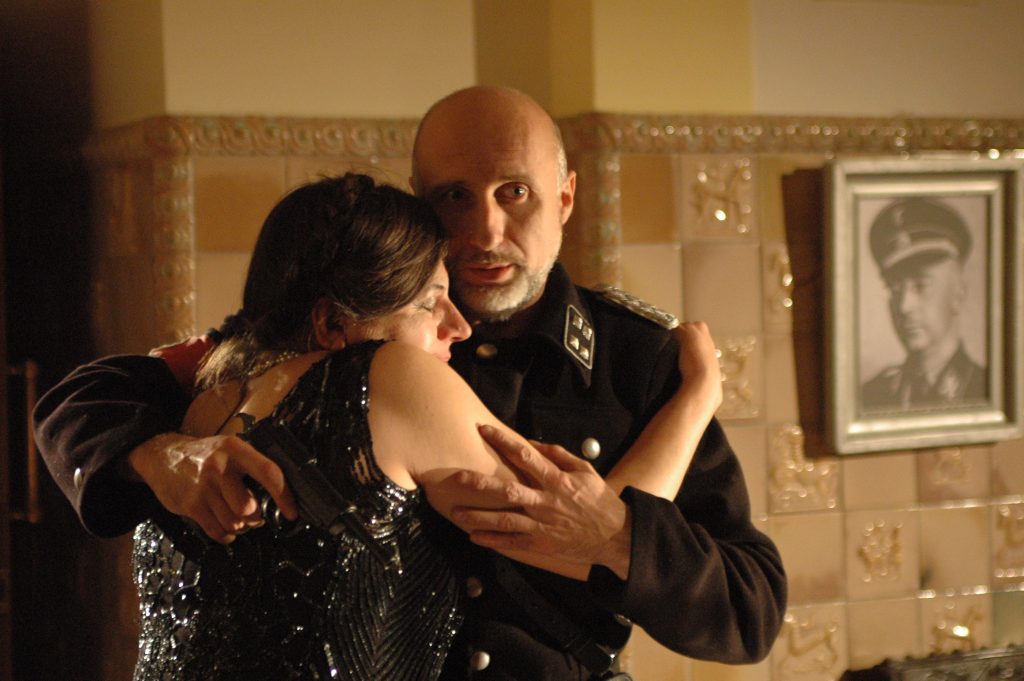 Zuzana – What is your role/function in the production and how long have you been part of this company/show?

We premiered the production in the 2005/2006 season. My character is Viera, sister of Rudolf Höller, who during World War II was the deputy commander of the concentration camp in Auschwitz, and due to the false identity he was secured by Himmler, after the war he escaped justice and worked as the president of the court in Germany.

Tell me a little about the character you play and what is the most challenging/interesting thing about playing them?

Viera is in an incestuous relationship with her brother Rudolf and shares with him a Nazi worldview even though she is really satisfied with her life in the present democratic western Germany. Interesting and demanding for me is how Viera shifts her positions between the two siblings: she is in opposition to the left- leaning sister Klara but is under the authority of her brother Rudolf, who desires the return of the Nazis.

What is your favorite moment in the show?

It’s at the end, when the celebration of Himmler’s birthday culminates in household of horrors. The drunken Rudolf threatens both sisters with shooting, and then he gets a heart attack. Viera, in the deafening tones of Beethoven’s 5ths symphony takes off Rudolf´s uniform of the SS officer and hides the Nazi symbols so the called doctor cannot see the truth. It’s absurd up to a comical moment.

What/who was the inspiration for choosing a career in theater?

Both of my parents were theater (and film) actors, Jozef Kroner and Terézia Hurbanová-Kronerová.

How would you describe the theater industry in your country?

I think theaters in Slovakia offer to their audience a wide range of productions, from high-quality light comedies to the most striking dramas of Slovak and world authors. I would, however, welcome it if there was more theater in the capital of the Slovak Republic – Bratislava.

Why do you think an audience should see this work?

Thomas Bernhard is critical and cruelly ironic to the characters of the play Eve of Retirement. I think that we, along with the director, managed to underline their vain desire for ordinary human happiness as well as their human misery.

Why do you think the work aligns strongly with the theme of “Rehearsal for Truth?”

I think the main reason is that the play by Thomas Bernhard tells us that the truth has to come out and evil has to be punished.

Who are your mentors? Where do you draw on your inspiration to create your character and pursue a career in the arts?

Inspiration is for me is the human being as such. I choose characters who are bored with their fate and are sad and ridiculous. It can be said that my most popular genre or domain is tragicomedy.

How do you think Vaclav Havel still influences theater creation in Europe?

It could be said that Václav Havel, as a playwright, follows the big absurd plays by Beckett and Ionesco. For me, however, Havel as a playwright is original and unique, he captures the absurdity of the time we lived in Czechoslovakia with sarcastic humor.

I am looking forward to walk around Park Avenue and visiting the La Mama Theater.

I fell in love with American playwright Tracy Letts, who is also a great actor. But my greatest desire is to play on the stage of the excellent Al Pacino. At the International Film Festival in Karlovy Vary, I admired his performance in the latest film Paterno.