Maria Kolesnikova had been hailed for her bravery when she ripped up her passport to prevent authorities in Belarus from forcibly deporting her. She was similarly defiant in the face of her lengthy sentence. 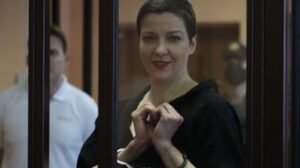 A leading Belarusian opposition figure smiled and made a heart symbol with her hands as she was handed an 11-year sentence on Monday, amid an ongoing crackdown on the pro-democracy movement by authoritarian president Alexander Lukashenko.

Maria Kolesnikova, a 39-year-old flautist and conductor turned activist, who is one of the most recognisable faces of Belarus’ opposition movement, was sentenced alongside fellow senior opposition figure, lawyer Maxim Znak, who was given 10 years in jail.

The pair, both members of Belarus’ opposition Coordination Council, had been found guilty of conspiracy to seize power by unconstitutional means, calling for action to damage national security, and creating and leading an extremist group – charges that the US said were manufactured and both defendants said were absurd.

Despite her plight, Kolesnikova, who had already spent a year in pre-trial detention, appeared buoyant in court, as she was filmed smiling and making a heart symbol from inside the glass cage where she and Znak were held.

“Maria & Maksim are the heroes for Belarusians. The regime wants us to see them crushed & exhausted. But look – they are smiling & dancing,” exiled opposition figure Sviatlana Tsikhanouskaya tweeted shortly after the sentences were announced.

“They know – we will release them much earlier than these 11 years. Their terms shouldn’t frighten us – Maksim and Maria wouldn’t want this.”

Kolesnikova was the head of the campaign headquarters of former presidential nominee Viktar Barbaryka, before he was jailed. She then became one of three women leading the opposition campaign against Lukashenko in the August 2020 elections, the results of which were widely disputed.

In the aftermath of the election, she was kidnapped by masked men in central Minsk last September, but thwarted their attempts to forcibly deport her across the border into Ukraine by ripping up her passport. She’s been in detention since.

Kolesnikova had been vocal about her desire to remain in Belarus, even as her colleagues were being driven out by Lukashenko’s persecution.

A number of European governments swiftly condemned the harsh sentences on Monday, with Germany, the UK and the European Union calling for Belarus to halt its campaign of repression and free political detainees.

“Their sentences must be reversed and they must be freed immediately.”

Bruce Millar, Amnesty International’s Deputy Director for Eastern Europe and Central Asia, said it was “clear” that neither defendant had committed a crime, and that their harsh sentences were intended to send a message to the rest of the opposition movement.

Their treatment, he said, was “designed to crush the hopes of the millions of people they spoke for – a generation of Belarusians who aspire for peaceful change and respect of human rights.”

“These courageous individuals are now set to spend much of their lives in prison for standing up against Alexander Lukashenko and his government’s repressive forces,” he said.
“No one will forget the bravery of Mariya’s decision to remain in Belarus. Her unwavering belief in freedom of expression and human dignity has been a beacon of light for people around the world. What Mariya and Maksim symbolise and stand for will outlast anything that the authorities throw at them.”

Eleanor Bindman, a Belarus expert at Manchester Metropolitan University, told VICE World News that the harsh sentences reflected their status and profile within the opposition movement.

“The hope now is that [Lukashenko’s] regime falls in the short term so that they do not serve their sentences in full,” she said.

The trial, which began a month ago, was closed to the public, with all proceedings classified, and participants required to sign nondisclosure agreements.

Kolesnikova is one of three candidates on the shortlist for the Vaclav Havel Human Rights Prize, awarded each year by the Parliamentary Assembly of the Council of Europe to honour work in the defence of human rights. The winner of the award will be announced later this month.