A newly refurbished building part of the European Parliament (EP) in Strasbourg was officially opened and named after former Czechoslovak and Czech president Vaclav Havel on Wednesday, July 5, 2017. It was inaugurated by EP President Antonio Tajani and Havel’s widow Dagmar Havlova. The decision to call it after Havel was made by the EP in January 2012 on the proposal of former EP deputy president and Czech MEP Libor Roucek.

Havlova pointed out that Havel addressed the EP in 1994 and in 2000. “He highly respected this international institution because it is based on the same values he himself espoused throughout his life, values for which he was fighting all his life,” Havlova said.

Tajani said that Havel was trying all life to reach reconciliation and peace: “His life and his devotion to democracy inspire us and bind us to carry on the effort to build a juster, stronger Europe that is closer to citizens.” 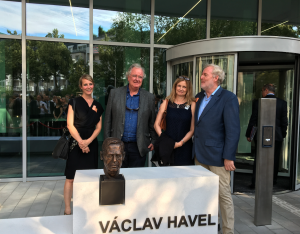 The building marked with the abbreviation “HAV” is made special and brought to life by the marvelous works of Czech artists honoring Havel. A bronze bust by Marie Seborova is incorporated into a stone bench in front of the entrance. Twenty-five photographs by his official photographer Tomki Nemec commemorating the period after the Velvet Revolution in 1989. 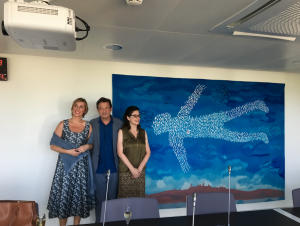 And the tapestry Flying Man 2 designed by Petr Sis and woven BY Aleliers Pinton decorates the main meeting room. The art works were all commissioned by Bill Shipsey, founder of Art for Amnesty and member of the VHLF Board of Directors.

Most of the building will be occupied by the EP and one third will be the office of the European Ombudsman.