In May 1996, president Vaclav Havel invited to Prague Elie Wiesel, an American writer, professor, political activist, Nobel laureate, and Holocaust survivor. He delivered a lecture entitled “The Seduction of Fanaticism” in the Ballroom of the Prague Castle. In his lecture, he strived to name the roots of fanaticism in society, and at the same time, to show that even an individual can succeed in defying the brutal machinery of destructive ideology.

Based on the revived recording of Wiesel’s lecture, the following panelists will discuss these and other questions:

The panel talk will be moderated by Jiří Pehe, Director of New York University Prague.

During the twenty-five years since Elie Wiesel’s lecture, the impacts of fanaticism have changed our lives substantially. Unlike Havel’s time – the Cold War and its aftermath – during which the world seemed to have a binary choice between democracy and totalitarianism that automatically tilted educated and fair-minded folks towards democracy, today’s world seems fed up and disappointed with majority rule. Or is it simply that “minoritarian” rulers have become more clever? The balance has tipped, and more and more countries show degrees of autocratic leanings or outright dictatorship.

Have we learnt any lessons as individuals and as a society to be able to face fanaticism? Are we capable of learning this lesson at all? What has changed to make democracy appear unsuccessful? What is democracy’s true track record in delivering change? Is democracy up to the challenge of addressing our planet’s existential crises such as fossil fuel replacement, climate-forced migration, and balancing a sustainable environment with the needs of the largest human population in history?

You can follow the panel talk on-line on Webex HERE
You do not need to install Webex, you can ”Join from your browser“

Elie Wiesel was born in 1928 in the town of Sighet, now part of Romania. During World War II, he, with his family and other Jews from the area, were deported to the German concentration 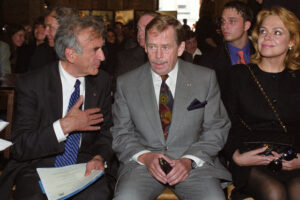 and extermination camps, where his parents and little sister perished. Wiesel and his two older sisters survived. Liberated from Buchenwald in 1945 by advancing Allied troops, he was taken to Paris where he studied at the Sorbonne and worked as a journalist. In 1958, he published his first book, La Nuit, a memoir of his experiences in the concentration camps. He authored fifty-seven books. In his many lectures, Wiesel concerned himself with the situation of the Jews and other groups who have suffered persecution and death because of their religion, race or national origin. Wiesel made his home in New York City and became a United States citizen. He was a professor of the humanities at Boston University, which created the Elie Wiesel Center for Jewish Studies in his honor. He was awarded the Nobel Peace Prize in 1986. 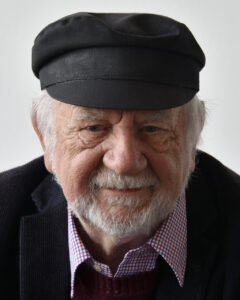 scholar, Americanist and translator. He was rector of Palacký University in Olomouc, president of the European Association of Americanists, member of the board of the Bologna Magna Charta Universitatum, and rector of the Central European University in Budapest and Warsaw. He is a member of many Czech and international scientific societies and holds honorary doctorates from British and two American universities. His lifelong efforts to promote the values of education, humanity and democracy have also earned him recognition as a citizen and politician. He was one of the founding members of the Civic Forum in Olomouc, a member of the Olomouc City Council and the Olomouc City Council, and a Senator of the Parliament of the Czech Republic, which he also represented in the Council of Europe.

of America (1984-94) and Radio Free Europe/Svoboda (1996-2003). Awarded the Pelikan Prize for his long-standing journalistic work for the restoration of democracy in Czechoslovakia and support of the Czechoslovak democratic opposition. He served (2003-2017) in the United Nations peacekeeping mission in Kosovo (UNMIK), where he served as coordinator of the Pristina-Belgrade dialogue mission and head of the mission’s political unit. He studied International Relations at the Universities of New York (BA from CCNY) and Washington (MA from SAIS/JHU).

Mediterranean Studies as well as director of NYU Prague. From September 1997 to May 1999 he directed the Political Department under President Havel and later served as the president’s advisor. Previously he was director of Central European research at the Research Institute of RFE/RL in Munich. The author of six books on politics and four novels, Pehe has written extensively on current events in Eastern Europe for American, Czech, and German periodicals and academic journals. 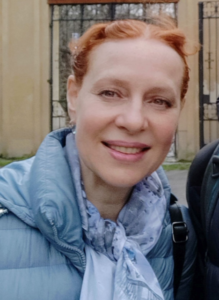 and professor for a decade. She has published on aesthetics, seduction and fascism in relation to the Nazi propaganda films of Leni Reifenstahl and the cinema of avant-garde Serbian director, Dušan Makavejev. She was a lead organizer of the Women’s March on Prague in 2017. As founder of Insight Cities, a network of local historian guides throughout Central Europe, she has developed an array of educational tours focused on WWII history and Jewish heritage in Prague, Berlin, Munich, Vienna and Budapest.

Neela Winkelmann-Heyrovská, founder and first director of the Platform of European

Memory and Conscience (2011-2018), an international association of legal entities supported by the European Union, which is dedicated to research, documentation, awareness-raising and education on the crimes of totalitarianism. The granddaughter of Nobel Prize winner Jaroslav Heyrovský has been active in the Czechoslovak and international environmental NGO movement since the mid-1980s, working with Josef Vavroušek on the preparatory committee for the 1992 UNCED World Conference on Environment and Development in Rio de Janeiro. She studied molecular biology at Charles University in Prague and received her PhD from Cornell University in New York. As an independent consultant in the field of renewable energy, she was awarded the Czech and European Solar Awards.

This discussion is organized by the Diplomatic Academy at the Ministry of Foreign Affairs of the Czech Republic, Vaclav Havel Library Foundation with support of Bohemian Benevolent and Literary Association and New York University Prague.

The discussion is part of HAVEL CONVERSATIONS ONLINE

What is the future of democracy in the post-pandemic world?

Today’s world, as we all know, is faced with multiple threats. From whichever angle I look at this menace, I always come to the conclusion that salvation can only come through a profound awakening of man to his own personal responsibility, which is at the same time a global responsibility.

Vaclav Havel, The Onassis Prize for Man and Mankind, Athens, 1993