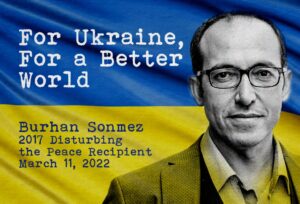 The twenty-first century, supposed to be a century of hope, is advancing from continent to continent with wars. Ukraine has now joined the horrors in Afghanistan, Iraq, Syria, Ethiopia and beyond. Putin went further and used the threat of nuclear weapons from the very beginning of his attack, bringing global disaster to the agenda. Death, emigration and exile have now become the fate of the Ukrainians. Opposing war is not as light a statement as it seems. In Russia, those who took to the streets saying “No to War” were arrested and threatened with fifteen years in prison.

As Russian attacks destroy cities, hospitals and cultural centers and the borders of the war spread, the assault is not only of a political, social and economic nature, but an assault on culture, already reaching deep into the world of art and literature, and undermining forms of free expression. The language of war suddenly infiltrates and pollutes the language of all life.
Truth is the first casualty in war. Clearly, the best way to fight lies is with the truth; challenge exaggerations with facts, and defeat half-truths with greater transparency. Literature can create another realm of truth, beyond borders.

Today, the world of literature is faced with the task of keeping the balance between opposing the war and promoting solidarity among nations, across cultures. Those who favor removing the statue honouring Fyodor Dostoevsky in Florence – the city in which he completed writing The Idiot; Dostoevsky should be reminded that he was in a prison camp in Tsarist Russia for five years because of his beliefs. For literature is trans-national, Dostoevsky does not belong to Florence or Russia, but to all of us.

Writers have only one homeland, which is a free world, a world where everyone lives happily and equally. Now, together with the Ukrainian people, we must express the longing for this world against Russia’s attack and strive to make it a reality. War separates, culture unites. It is our language of hope against despair that saves humanity.