Editor’s Note: The Oslo Freedom Forum took place last week. This is the annual human-rights gathering in the Norwegian capital. Jay Nordlinger has been writing a journal on this gathering, and related matters, and the previous parts can be found at the following links: I, II, III. 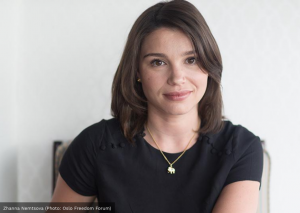 Onstage at the Nye Theater is Carah Faye, a young singer from California. (She was born Carah Faye Charnow.) Lovely woman. She will sing a song called “Freedom” — appropriate, as she says.
It’s now time to award the Václav Havel Prize for Creative Dissent — which will go to three recipients, as is traditional.
On hand to introduce the first one is Srdja Popovic, the Serbian democracy leader. He helps democracy movements all around the world. He gives them the benefit of his (hard-won) experience. He knows a thing or two about fighting dictators.

Humor, he says, is an important anti-dictatorial weapon. It “breaks fear,” he says. Plus, mockery makes dictators do stupid things. He tells stories about Milosevic, Putin, and Mugabe.

So, the first recipient of the Havel prize is a group, a project: El Chigüire Bipolar. This is a satirical media project in Venezuela. These guys are excellent skewerers and fear-breakers (or fear-lesseners). They have almost 1.8 million Twitter followers.

Maduro, in his fear and upset, accused El Chigüire Bipolar of owning Twitter! The next recipient is an incredibly brave man: Silvanos Mudzvova, an actor, playwright, and activist from Zimbabwe.

“Our country has one TV station,” he says, “and it is owned by the state. We’ve lost faith in listening to it. Same with the radio stations. This is where I come in. I do theater, representing the voices of the voiceless.”

He points out that there is 95 percent unemployment in Zimbabwe. Nobody is working. So, “you are assured of an audience within minutes.”

Mudzvova was arrested so many times — during or after performances — that he lost count. Eventually, they tortured him almost to death. “They electrocuted me on my private parts. Later, they injected me with something that has still not been identified.” These goons left him paralyzed on his left side.

He is now in exile, in Britain — recovering. He tells us, “Thanks for recognizing that there is a country called Zimbabwe.” In other words, please don’t forget us — and know that Zimbabwe is larger than the dictator, Mugabe.

The third recipient of the Havel prize is Aayat Alqormozi, a young poet from Bahrain. Her crime, of course, was writing poems, and, worse, reciting them, in public. They arrested and tortured her. They expelled her from the university. The police told her, “You can forget about your education and your future. You’ve destroyed your life already.”

She took that sentence as a challenge (“sentence” in more than one sense): You’ve destroyed your life already. She determined that, in fact, her life would not be destroyed. She would persist.

Aayat has finished her bachelor’s degree and is now planning a master’s.

She makes a key point about dictators and their agents: “They hate peaceful people. They want us to be criminals, so that they have an excuse to destroy our lives and kill us in cold blood.”

She also tells the audience, “They released me because of you: because of international pressure.”

Maria Toorpakai Wazir is a most interesting person. I’ll quote from her bio: She is “a professional Pakistani squash player and an advocate for women’s rights.” She was “raised in South Waziristan, one of Pakistan’s tribal regions dominated by the Taliban.”

I want to tell you what she says about her parents. First she says that Waziristan is no place for a woman: They are kept at home, denied basic rights, certainly denied education.

“My father is a free-thinker, who believes in education and equality. After their marriage, he started educating my mom. He said, ‘Put away the burka. From now on, education is going to be your protection.’” Today, that woman is a high-school principal.

Zhanna Nemtsova is the daughter of Boris Nemtsov, the Russian democracy leader who was killed two years ago. After the assassination, Zhanna moved out of Russia, for security.

Her father was murdered while crossing a bridge, in sight of the Kremlin. She says that supporters erected a memorial there. Then it was destroyed. So, the supporters rebuilt the memorial. Which was again destroyed.

“Today, I want to use this opportunity to say ‘Thank you’ to all the people who have maintained the memorial for more than two years, an unprecedented case for Russia.”

That’s what Zhanna says. She also talks about the latest news from Moscow: A theater director, Kirill Serebrennikov, has been arrested, and his offices have been raided. “I want to express my solidarity with him,” says Zhanna, “and offer my support.”

To have your father murdered is a rotten thing. Zhanna Nemtsova is a gutsy young woman, and the daughter of a great man.

Viktor Yushchenko, as you know, was president of Ukraine from 2005 to 2010. While running for office, he was poisoned, his face disfigured badly. I saw him shortly after, at Davos. Let me quote from the journal entry I wrote:

“Probably the most moving and inspiring person at Davos is Viktor Yushchenko, the new president of Ukraine. First, there is the look of him: He wears the opposition to him — the evidence of evil — on his face. He is a figure of immense dignity.”

I don’t think I have ever seen a nobler face, ever. I’ll never forget it.

He is here at the Freedom Forum. I see him at dinner. His face is cleared up, and he looks entirely well. Near him is Vladimir Kara-Murza. He, too, looks well, after two poisonings, which almost killed him.

The KGB (or whatever they’re calling themselves these days): They like their poisons, don’t they?

Chris Turner, the British comedian-rapper, is entertaining again. I notice something, and this is common, always has been: When he sings or raps, his speech turns American. The second he begins to talk, he’s British again.

Asking for audience involvement, he says, “I’m going to put the ‘u’ in ‘humour.’ Sorry, America, that’s the way you spell it.”
Funny.
I meet a young man from Sweden named Wallenberg. “Any relation?” I ask. Yes: father’s second cousin. Remarkable.
What a great, immortal man (Raoul Wallenberg).

Lying tweets are a fact of life, and I spot one about me. I want to respond to it, harshly. First, however, I brood about it. Then I interview Guillermo Fariñas, the great Cuban dissident. He tells me that he refuses to take revenge on the guards who tortured him. I make a mental note to myself: “You don’t need to respond to that tweet.”

I think I’ll wrap up for today, y’all. See you tomorrow for Part 5, the finale of this journal.