Chinese human rights activist Chen Guangcheng received an award Thursday from a US organization dedicated to the memory of the victims of communism. 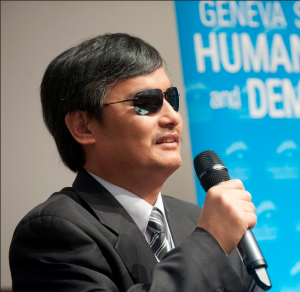 Chen, who escaped house arrest in China in 2012, was awarded the Truman-Reagan Medal of Freedom from the Victims of Communism Memorial Foundation (VOC) at a dinner in Washington.

Chen, who is blind, suffered years of imprisonment, house arrest, harassment and other abuses in his village before he escaped.

The 43-year-old self-styled “barefoot lawyer” began his activism by promoting the rights of disabled people before capturing international attention thanks to his support for victims of forced abortions and other abuses under China’s one-child family planning policy, which was recently relaxed.

Marion Smith, executive director of the Victims of Communism Memorial Foundation, said Chen became the voice for the ignored and abused in China in the face of great odds.

“As the Barefoot Lawyer, he sought justice for those who could not stand up to the repressive communist government on their own and won the admiration of the world for his sense of fairness and his crusade for freedom,” Smith said.

A barefoot lawyer is a self-taught legal activist.

The VOC has given the award since 1999 and previous recipients include the former president of the Czech Republic Vaclav Havel, former Polish president Lech Walesa and Pope John Paul II.

The award is presented annually to an individual, an institution or a group of individuals that have demonstrated a lifelong commitment to freedom and democracy and opposition to communism and tyranny.

Chen told dpa in October he was “very optimistic” about the development of democracy in China.

“I think more and more Chinese people … realize why Chinese society is not fair, why the things they eat contain poison, why pollution is so severe, why corruption is so serious,” he said, speaking in London.

“It’s because there’s no supervision, no system of checks and balances. More and more people know this. In the future there will definitely be a transformation.”