The Dada von Bzdülöw Theatre Company from Gdańsk, Poland will be participating in the Rehearsal for Truth Theater Festival in honor of Vaclav Havel. Their production, “INTRO” will open on Sunday, October 1, 2017. We chatted to Leszek Bzdyl, co-founder of the company, about the show, creative inspiration and Vaclav Havel… 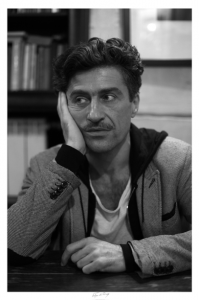 What is your role/function in the production and how long have you been part of this company/show?

25 years ago, in December 1992, together with Katarzyna Chmielewska we founded Dada von Bzdülöw Theater, and for the past 25 years, I have been working on the program and artistic direction of the group. “INTRO” is a kind of performance that can be placed in the genre of so-called political theater. However, that’s not a program rule of our theater. In our group’s history we touched only upon some social or political issues a few times, in such shows as: STRATEGY, BARRICADE OF LOVE, LE SACRE.

What/Who was the inspiration for the creation of this production?

INTRO was created in response to the growing acceptance of extreme national, nationalist and xenophobic declarations in the Polish public debate. In 2015, somehow in a futuristic way, we presented a monoculture psychosis that will have to be confronted by potential immigrants trying to settle down in Poland.

Why do you think the work aligns strongly with the theme of “Rehearsal for Truth”?

The legacy of the 1989 democratic revolution is very close to us. Our theater was created on that wave of freedom, also the one concerning the free artistic thought carried by the giants of those years, among them, of course, Vaclav Havel. Our performance naturally evokes irony, lightness, wittiness and freedom, that is the TRUTH, in the name of which the Eastern Block carried out the democratization process.

What is the core political issue you are grappling with in the play?

When we were making INTRO, the refugee problem wasn’t yet so blown up by the politicians of the extreme right. By introducing the characters of a Jew, a Croatian nationalist, an Arab woman and a Chechen to the show, we thought of mocking the character of the Pole. The Pole is the one who happens to feel like the messiah of Europe, a Pole gazing at his or her national navel, and dreaming of the purity of Polish blood, and of shedding that blood on the altar of national church.

Who are your mentors? Where do you draw on your inspiration to create your work?

What is your favorite moment in the show?

All scenes! But one is somehow a quintessential event. The girl, who for 40 minutes of the show is dressed in a skirt and a top, barely covering her breasts, announces that she is from the Middle East. By force she is being dressed in a costume worn by women in the countries of religious fundamentalism. We are the ones who stigmatize those “others”.

Can you tell me a little about the chosen visual/physical style of your production?

In the show we mix punk music with a musical, physical dance with dramatic acting. We overstep the boundaries of genre, thus keeping in line with the performing strategies developed over the years in our theater.

I look forward to meetings and talks about the world that surrounds us or the hope for the future. Quoting Vojáš Švejk: “It is not fine. But you don’t have to lose hope”, as the Gypsy Jankie said while they were hanging him in Pilsen and putting his head in a noose.”

INTRO opens on October 1, 2017 @ 7PM
The show will be performed in Polish with English subtitles
Talk back after the show introduced by Anna Galas-Kosil, Zbigniew Raszewski Theatre Institute

“INTRO” by Dada von Bzdülöw Theatre, Anno Domini 2015, draws inspiration, recognition and nervous melancholy from the undying spirit of the Dada movement, which – as its Apostles used to say – was, is and will be. 99 years after the emanation of Dada in Zurich (AD 1916), accompanied by the scent of blood from the trenches of Verdun, national exultation, and the revelations of Fatima – Azazel or whatever he happens to be called by the Talmudists or the Islamists – debuted in Poland. Under the wings of Azazel, Poland has become a thesis, synthesis and antithesis at the same time. Under the authority of Azazel, there’s a growing conviction in a Pole that ONE means more than MANY. Dada Theatre, inspired by the spirit of dada, is going to rip the veil off it, and reveal the deadly face of the Angel of Death; it’s going to laugh in the face of the Angel of Death. Dada von Bzdülöw Theatre in the play “INTRO”, both mockingly and desperately, shouts out: Dada is Polska!!! The shouting and dance of Dada von Bzdülöw Theatre is accompanied by a musical band Nagrobki /Gravestones/.

“Intro” with absurd black humour, desacralizing it all, can do more than all reasonable discussions infested with scientific arguments together. A concoction of red and white symbols, sharp sounds of vuvuzelas, explosives, Polish Green-legged chickens, demonic Muslim women, all of that makes us find certain distance that the present reality seems to lack so much. Yet, it is a provocation for provocation, as dictates uninhibited by anything imagination of dadaists. Because first and foremost “Intro” is a challenge, faced by all our myths. Anna Jazgarska, Teatralny pl

“Intro” is not a lightweight performance, easy and enjoyable. It entices with dance attraction and originality in choreographic exploration of expression, but leaves the viewer many a times in a dark alley, where you can’t know whether still laugh or already start being serious. It enters into a discussion on national identity, and shows how little space for freedom remains, when xenophobia comes along with total disengagement, mistakenly defined as tolerance. Can “Intro” thus, with its ironic and grotesque message, take a stand in this difficult and uncomfortable social discourse? Further than the wall we cannot go, but the plaster may start chipping off. Anna Kołodziejska, Teatralia

For the individual performers

I play the role of Zorana Vukmirović, who wants to live in Poland now, because here the true nationalism is being born, and the one in Croatia has long gone to the dogs!

The “donut” scene because that’s an attempt to form a community, which at the very start is doomed to failure, however, that very attempt matters somehow.

My circle of friends -:)

I’m really curious to know how “INTRO” will be received by the audience and what interesting discussion on it might follow suit. I’ve been to New York already, and presented a different performance then, and now I find it very exciting that after 10 years I have this opportunity again to perform here in NYC.

The truth is relative, and I like the idea of taking up the subject, and trying to face the most difficult aspects of our times, namely: the manipulation of message, information and the truth.

In the performance “Intro” I play the role of Chechen, who in the name of the highest dedication and love for Poland wants to blow himself up for this country. This positively hyperactive disposition of my Chechen character, throughout the whole show, does not allow him to stop, jokingly one might say that the Chechen is like a ticking bomb, which can explode at any moment. However, blowing up is not an act of terror here, but rather a metaphor of expressing the most genuine love for Poland – the beloved country of his own choice, where he simply, and uncompromisingly, feels best.

When I am reading my handwritten letter that is an ironic and political expression of the Chechen’s feelings towards his new homeland.

I’ve been inspired by the people who I’ve been yet meeting on my artistic path. What I find crucial is trying to open yourself to another human being and trying to understand them. Then the meeting happens which somehow enriches you all with the very experience, and therefore also with some new inspiration.

I’ve never been in New York. I’m curious to see this place and to experience the cultural life of NYC. I’ll surely go to a theater or some cult cafés and try and meet with some local artists.

“Rehearsal for Truth” is a bold and courageous idea, so we’ll see what reception it’s going to have among the festival audience.

My character – Nazira Ibtihaj comes from the Middle East. She arrives to her beloved, new country – Poland. Nazira wants to give “all the wisdom and heritage”, she wants to share all that she has. Nazira believes that the future of fundamentalism is right here in Poland.

It’s a kind of “taking communion” scene, when we’re having a donut together. At some point, we all meet in a too tight room, squeezed, somehow forced to perform an important ceremony and to reconcile. Everyone digests this strange encounter in a different way. Something cracks then, and for me, that’s the break point of the whole show.

People who shifted my understanding of what is possible, who go beyond common paths, who stay true, as: Anna Halprin, Michael Stöppler, my mentor. Also, as a small girl, I got strongly attracted by the creators of Dada Theater. My timeless inspiration too has been a writer Julio Cortázar.

I look forward to some inspiration from the city vibes, and the exchange with the artists and the audience who I’m going to meet there.

It’s a challenge and opportunity to try and examine for yourself the subject of how to be and stay true in your political, emotional and social surroundings and then to try and transfer it on stage.