Alexandra Ratajova, an undergraduate student at the Academy of Performing Arts (DAMU) in Prague, is the first woman to win the annual contest for the best mini-drama based on a play by Vaclav Havel. This year’s contestants for the award were asked to write a one-act play on the theme of “love,” inspired by a passage from the third act of Havel’s play Largo Desolato. 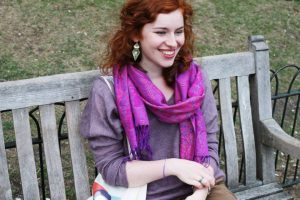 Alexandra graduates this summer from DAMU’s Department of Theory and Criticism with a B.A. degree. She chose this focus because she originally wanted to be a playwright, but there is no department or college specializing in that area in the Czech Republic. In the course of five semesters at DAMU, however, her priorities have changed. Although she has enjoyed learning about the theory of theatre and the potential power of critical thinking, the highlights of her studies have been creative writing and stage creativity. Alexandra now hopes to work on the practical side of theater—writing, directing, and otherwise participating in the creative process of staging a play.

While in New York, Alexandra will take part in classes at the Lee Strasberg Theatre Institute, one of the training studios of the Drama Department of New York University’s Tisch School of the Arts. During her two weeks in New York, she will sit in on a variety of classes with students at both the beginning and advanced levels, taught by the Tisch School’s outstanding instructors.

The Fellowship for Czech Theater Student is organized by the Vaclav Havel Library Foundation together with the Theatre Faculty of the Academy of Performing Arts in Prague, Tisch School of the Arts at New York University, and Consulate General of the Czech Republic in New York. The fellowship is generously supported by Joseph Balaz, treasurer of the VHLF Board of Directors.