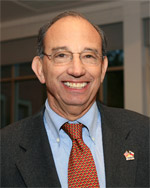 Mr. Dine has had a 50-year career in foreign affairs and the politics of U.S. foreign policy. A participant on five non-profit boards, he currently serves as President of the American Friends of the Czech Republic, Vice Chair of Freedom House, President of the California House Condominium Association, and board member of the Jewish Federation of Greater Washington and Artists for Human Rights. Tom Dine was the longest serving Director of Radio Free Europe/Radio Liberty headquartered in Prague, Czech Republic, where he was based from 1997 till 2005. Prior to his leadership of the radios, he was the Assistant Administrator of the U.S. Agency for International Development’s programs in Central Europe and the former Soviet Union.

Mr. Dine commenced his career as a Peace Corps volunteer in the Philippines (1962-64), and went overseas again to serve as personal assistant to Ambassador Chester Bowles at the American Embassy in New Delhi, India (1967-69). Afterwards, he worked on foreign policy legislation in the U.S. Senate for a decade, Legislative Assistant for Foreign Policy to Senator Frank Church (1970-74), Senior National Security Director for the Senate Budget Committee (1975-1979), and Defense/Foreign Policy Adviser to Senator Ted Kennedy (1979-80). He subsequently served for more than 10 years as Executive Director of the American Israel Public Affairs Committee. He holds a BA degree from Colgate University, an MA in South Asian history from UCLA, and an MLA from Johns Hopkins University. He is married to Joan Corbett and they have two daughters and four grandchildren.