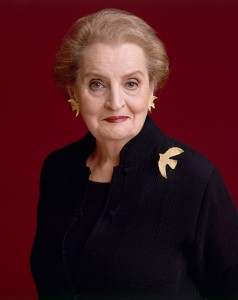 Madeleine Albright, née Marie Jana Korbel, is a Czech-born American public official who served as U.S. Ambassador to the United Nations (1993–97) and who was the first woman to hold the cabinet post of U.S. Secretary of State (1997–2001). She was the daughter of a Czech diplomat. After the Nazis occupied Czechoslovakia in 1939, her family fled to England. The family returned to Czechoslovakia after World War II, but the Soviet-sponsored communist coup made them refugees again, and by 1948 they had settled in the United States. Madeleine Albright and Vaclav Havel became close friends immediately after Havel’s election to the President’s office. Ms. Albright worked with Havel on guiding his country into NATO and preparing the way for its entry into the European Union.

She left government service in 2001 and founded the Albright Group, a consulting firm based in Washington, D.C. She is a Professor in the Practice of Diplomacy at the Georgetown University School of Foreign Service. A frequent columnist on foreign affairs issues, she served on the board of directors of the Council on Foreign Relations. Albright wrote a number of books, including the policy primers The Mighty and the Almighty: Reflections on America, God, and World Affairs (2006) and Memo to the President Elect (2008). Madam Secretary (2003) and Prague Winter: A Personal Story of Remembrance and War, 1937–1948 (2012) are memoirs. Ms. Albright has received numerous honors for her contributions to diplomacy, democracy and world affairs, including honorary degrees from several universities, and in 2012, President Barack Obama awarded her the Presidential Medal of Freedom.