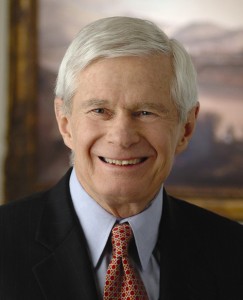 Fred Malek is Founder and Chairman of Thayer Lodging Group, a private equity firm that has acquired over $3 billion of hotel assets and has consistently earned top returns for investors. Previously Mr. Malek was President and CEO of Marriott Hotels, President and CEO of Northwest Airlines, and Co-Chairman of CB Richard Ellis. In addition to his business career, Mr. Malek has served as an advisor to four U.S. Presidents. He was Special Assistant to the President of the United States, and Deputy Director of the U.S. Office of Management and Budget under Presidents Nixon and Ford. He advised President Reagan as a member of the executive committee of the President’s Council on Cost Control, as a member of the President’s Commission on Private Sector Initiatives, and He served President Bush as Director of the 1988 Republican Convention, as Director of the 1990 Economic Summit of Industrialized Nations, with the lifetime rank of Ambassador.

Mr. Malek has been an active philanthropist serving on the Board of the Aspen Institute where he is Chairman of the Finance Committee and member of the Executive Committee, on the Board and Executive Committee of the American-Israel Friendship League and on the Board of the George H.W. Bush Library Foundation. He is Chairman of the American Friends of the Czech Republic, among others. Mr. Malek is a graduate of West Point and the Harvard Business School, and was an Army airborne ranger serving with a special forces team in Vietnam. He resides with his wife in McLean, Virginia, and is the proud parent of two children and grandfather of five.