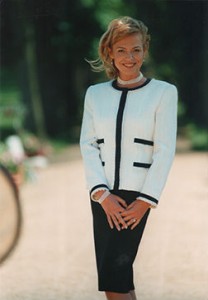 Dagmar Havlova is a popular and award-winning Czech theatre, film and television actress. Throughout her acting career she has played in 50 films and over 200 television productions. She has received a number of awards for best acting performances and has even been awarded as the most successful actress several times. Her most significant stage roles include Jana in Anouilh’s The Lark, Catherine in Shakespeare’s The Taming of the Shrew, Lady Macbeth, the lead role in lonesco’s Macbeth, Preissova’sGazdinaRoba, in Stridberg’s Queen Christina, in Horowitz’s Moment of Truth, and Chekhov’s The Cherry Orchard.

She married the President Vaclav Havel in 1997, whereby taking on the challenging task of first lady. She accompanied her husband on his work duties and was intensely devoted to charity. In 1997, she established the Dagmar and Vaclav Havel VIZE 97 Foundation, in which she figures as the Chairwoman of the Board of Trustees. The VIZE 97 Foundation focuses on four areas – welfare, healthcare, education and culture. Its fundamental projects are the Prague Crossroads, the Fund of Understanding, Early Diagnosis and Prevention of Colorectal Cancer, and the VIZE 97 Prize. She is one of the founders of the Vaclav Havel Library that functions as a center for the documentation and research of modern Czech history with an emphasis on promoting the ideas and works of Vaclav Havel. Mrs. Havlova is a member of Femmes d’Europe and is an honorary chairwoman of the Czech Committee for UNICEF. She is an active member of several other Czech and international charity organizations. Alongside her charity work she has recently returned to acting.