…(I)t is a rare speech – one of a leader who dared strip his countrymen of any illusions about their country, in order to lay bare the grim reality that everyone needed to accept in order that everyone could then embrace the necessity for and urgency of change.

TODAY of all days – and not surprisingly so – my thoughts return to Vaclav Havel, the writer who helped lead Czechoslovakia’s Velvet Revolution in 1989 that hastened the collapse of the Communist regime, and then became its first president. 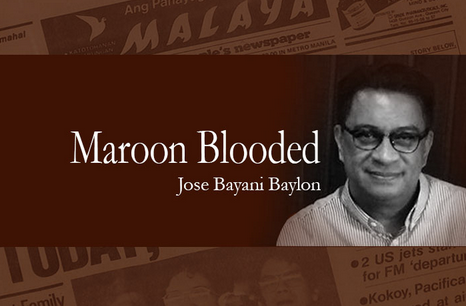 On January 1, 1990, the author-turned-leader gave his first State of the Nation address, opening with these words:

“For forty years on this day, you heard, from my predecessors, variations on the same theme: how our country was flourishing, how many millions of tons of steel we produced, how happy we all were, how we trusted our government, and what bright perspective were unfolding before us.

“I assume you did not propose me for this office so that I, too, would lie to you.

“Our country is not flourishing. . . . Entire branches of industry are producing goods that are of no interest to anyone, while we are lacking the things we need. A state that calls itself a workers’ state humiliates and exploits workers. . . . A country once proud of its educational standards now spends so little on education that it ranks seventy-second in the world. We have contaminated the soil, rivers, and forests bequeathed to us by our ancestors. . . . Adults in our country die earlier than in most other European countries. . . .

“But all this is not the main problem. The worst thing is that we live in a contaminated moral environment. We fell morally ill because we got used to saying something different from what we thought. We learned not to believe in anything, to ignore each other, to care only for ourselves. Concepts such as love, friendship, compassion, humility, and forgiveness lost their depth and dimensions…”

I’ve always been haunted by this speech since I first read it in the 1990s. Haunted, because it is a rare speech – one of a leader who dared strip his countrymen of any illusions about their country, in order to lay bare the grim reality that everyone needed to accept in order that everyone could then embrace the necessity for and urgency of change.

He was also a leader who did not engage in cheap populist rhetoric as both a means and an end, even though it would have been easy to simply demonize the Communist past and use it an excuse for the difficulties of the present.

To be sure, the going was not easy for Havel. In the end he presided over the division of Czechoslovakia into the Czech Republic and Slovakia a mere three years later – what could be more real and painful change than that? The deep seated divisions within his country could no longer be papered over once the authoritarian regime was gone.

What to me was most refreshing about Havel as a leader was that he spoke the truth to his people. Contrast that with leaders last and present who always think it is their duty to paint a rosy picture of how things are, as if the people didn’t know the truth?

“You did not propose me for this office so that I, too, would lie to you,” Havel said.

That wasn’t going to be his style, because that wasn’t what the Velvet Revolution was all about. As the Communist system was collapsing all over Eastern Europe in 1989 people everywhere were yearning to be free from the controlled media and the propaganda that they had been fed for nearly 50 years. In the process they came face to face with the truth they knew – or at least suspected – deep in their hearts, but which was being disguised for and kept from them by the authorities.

A natural tendency for those in power, I guess, especially those who wish to stay in power for as long as possible.

“Our country is not flourishing,” he pointed out, and soon enough Czechoslovaks were to realize how far behind their living standards were from those of the West.

But even that wasn’t the worst problem of all.

In what to me is the most jarring part of his speech he says “… the worst thing is that we live in a contaminated moral environment. We fell morally ill because we got used to saying something different from what we thought.”

How opinion surveys work in an environment like that, one must wonder. How does a government that is supposed to be nourished by public opinion get proper nourishment this way?

And how can a government rightfully claim to be speaking on behalf of its people when its people are not saying what they truly feel?

Thirty years after, Vaclav Havel’s New Year 1990 speech remains as relevant as ever for democracy-loving people the world over.