For three consecutive years now, it has become a ritual for me to roll out drums and celebrate Prof. Iyorwuese Hagher on the occasion of his birthday anniversary. I do this every year not because he is my principal and not because we have remained close since 2018 when I served on his Presidential Campaign Organization unto this moment, but because it is customary and important to mark the birthday anniversaries of prime movers in leadership, academia, politics, culture, arts, business etc. with discourse, symposia, performative criticisms as well as assessment of the individual’s achievements and contributions to the development of the society. 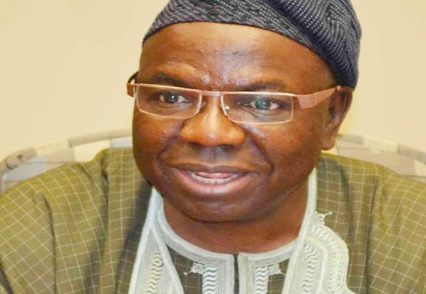 Hagher is a fierce scholar, politician, diplomat, administrator, public intellectual, one of Africa’s leading voices on leadership ethics, a patriot, an achiever, a leading Africa’s dramatist and one of Africa’s finest contempory thinkers who has lived up his life to this point in time straddling the various worlds or disciplines of politics, academia, management and of social action. Oga. S. Abah in Theatre, Politics and Social Consciousness in Nigeria (A Celebration of the Dramaturgy of Iyorwuese Hanger) said, “I dare say that when we are looking for examples of writers in politics, some of the good cases we can invoke are Vaclav Havel of Czech Republic and Agusto Boal of Brazil.

I also put in this category Iyorwuese Hagher of Nigeria”. Vaclav Havel was one of the dissident writers in Czechoslovakia who took the repressive communist regime to task and fought ceaselessly for justice and democracy and later became the President of Czech Republic. Agusto Boal moved from prison to exile and to becoming the Mayor of Rio de Janeiro. In keeping with his commitment to art for social justice and democracy, he invented legislative theatre — a theatre practice which facilitated legislation, monitored its implementation and performance.

In its conduct of mediating society, this theatre held politicians accountable. Hagher may not be a president and he may not have experienced exile outside the national shores but political activism he has engaged in plentifully well. He knows politics, writes about it and practices it. And when you talk about writing, he has done wonderfully well and distinguished himself.

Renowned scholar and literary critic, Prof. Olu Obafemi, had this to say about him in his foreword to Prof. Iyorwuese Hagher’s book Corruption in Africa(Fifteen Plays): “I dare say that among us members of his generation, he is perhaps the only one who stands tall in multiple careerisms, and who made it to the very top in everyone — as scholar/intellectual, as a theatre practitioner and as a politician”. His works written spanning a period of over 40 years (1974 – 2019) and produced in the throes of other engagements as a university professor, theatre director, senator, minister, ambassador and an enduring partisan politician reveal a great asset of Hagher — a largesse of heart and laughter and gracefulness, which given his boundless power of humour, provocation of laughter could easily be mistaken for cavalier or even light-headedness, unless you know the man intimately and are familiar with his unimaginable exploits — versatile creativity, profound scholarship and dogged political engagement. One admirable and unique thing about Hagher is that despite retiring as a university teacher since 2001, he has remained consistent in writing and producing intellectual materials as though he is in active service. He has remained on top of the game.

In a recent private discussion I had with a well respected professor of African Literature and Critical Theory at the Nasarawa State University, Prof. Terhemba Shija, when Hagher was mentioned, Shija was full of praise for the distinguished playwright and diplomat for refusing to lose relevance in the intellectual firmament despite achieving everything in academics, not being in active service as a university teacher and being advanced in age.

He said reading Hagher is always a delight and as refreshing as ever and shows the name does not joke with his fund of knowledge and keeps it up to date. Not only that; his insatiable thirst to continue to offer intellectual interventions for the development of the society and improvement of education and knowledge remains legendary.

It seems Hagher comes out with a new book every year. A few days after my discussion with Prof. Shija, I was discussing with Prof. Hagher on the phone when he told from his American base where he has been holed up by the Covid-19 problem that he has just completed a full-fledged novel of over 300 pages — a product of the Covid-19 forced seclusion.

It was again surprising when he told me some days ago he is about to complete a new play. Perhaps, the issue to pay attention to is not that Hagher has practised politics or that he has written plays, poems, numerous books and articles and essays and now has a novel in manuscript or that he is versatile across genres.

It is that he has combined them so well without attrition! Therefore, this piece is a double-barreled celebration of someone attaining the age of 71, and of a man who has in over 70 years of his life done service to his society. 71 years is significant in the fact that we are talking about more than half a century; and I can tell you, and we all know in a place like Nigeria where life is a perpetual uphill task, in a country where we are living almost under siege, and in an environment where the average life expectancy is no more than 51, it is a milestone to be 71.

I therefore say that longevity is good, and it is worth celebrating. But the greater significance of 71 should be seen in what has been accomplished in that period with one particularly being interested in his many remarkable years of profound intellectual commitment, activism for a just society and commitment to the cause of the masses.

His life has been replete with mega wonders, a lot of success stories and admirable values and attributes worthy of emulation, especially in a society challenged by values and desperately in search of honest leaders and men and women of dignity and honour with celestial values who will do us proud as true patriots. In life, many people go about in big selves but when you scratch them, you find them empty. Men of substance and value are not necessarily those dressed in gold or diamond or those dressed in the most glamorous and expensive attires, but men of modest lifestyles. Interestingly, when you scratch them, you find a goldmine.

Perhaps, these ironical lifestyles could be used to describe Prof. Iyorwuese Hagher who has a lot of elevating and high-flying achievements and success stories to his name yet without airs. Those who know Hagher or who have come in contact with him will attest to the fact that he is a gentleman with a simple lifestyle, disliking luxury and does not like attracting unnecessary attention to himself.

Still, he remains a man of substance with cerebral endowments which the whole world has been immensely tapping from: his leadership mentoring of both the present and next generation of world leaders through his leadership institutes across the world, promoting good governance and deriding injustice against humanity using advocacy and activism through his intellectual interventions in the frame of books, public lectures, published articles and essays in journals and the electronic and the print media, which in his words as captured in his book, Diverse But Not Broken: “that not just my State, Benue State; but Nigeria and Africa will rise up from the ashes of our painful past as a people oppressed by our leaders and environment, to embrace a new future; where every child born will have freedom and opportunity, to rise to his or her true potential. We all must be vigilant to raise our voices against unwarranted abuse of power, privilege and class wherever and whenever it manifests itself.

Only through this vigilance can we guarantee a life for our people; for a people without civil liberties are a dead people. “ This perhaps informed his decision to run for the presidency of the country on the wings of the Social Democratic Party(SDP) in 2019 for Nigerians to give him a chance to manage the power thrones of Aso Rock and offer succour to victims of social, economic and leadership malady.

Hagher is a quintessence of modesty and self-effacement. He leads a Spartan life and is not given to a sybaritic lifestyle.

He has always been an eloquent champion of the common man and a man with a heart full of gold who is very passionate about touching lives and very generous in alleviating the suffering of the needy in the society. He is a first rate scholar in his own right, and a gentleman to boot.

This is probably the reason no one has been able to accuse him of fraud and criminality or stealing government money. One of the few politicians around with no official baggage of graft and corruption around their neck.

Working with Prof. Hagher calls for serious hard work and perseverance for the principal is a principled workaholic. But good enough, he rewards your efforts. Once he knows that you are also diligent, there is nothing you want that he will not give you. He is fair and just. He believes hard work does not kill. A great cultivator of acquaintanceship and companionship. He is very purposeful. Without sounding hyperbolic, his sense of humour is terrific.

The truth is that in spite of his phenomenal educational attainments, professional and governmental accomplishments, Prof. Iyorwuese Hagher wakes up every day thinking and generally carrying on that he could have done much more. He seldom masks the fact that he is vexed by the glaring failure of the nation to achieve much more, 59 years after independence. He believes the nation has grossly underutilized its huge potentials both in human and natural resources.

Hagher is of the firm belief that in a rapidly changing world, Nigeria ought to have become matured enough to seamlessly tackle basic challenges such as provision of modern infrastructure across the country; efficacious delivery of the best of healthcare, power, education, security, science and technology as well as food to the citizens. He believes the nation has been grossly mismanaged by his generation and seems desperate to do his bit and his very best to help atone for this.

–Gum is the author of the novel, The Cry of a Widow. He is media assistant to Iyorwuese Hagher