As Czechs lose sight of the freedoms and benefits they won as part of the EU, Kremlin boosters step up their activities—and some are at the top of government. 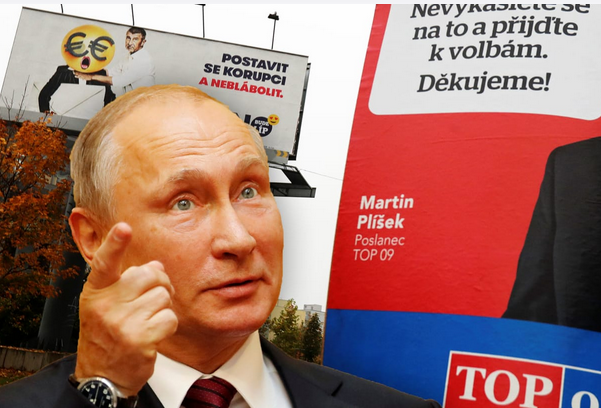 Roman Maca is a big guy. He stands about 6-foot-6 tall, so he makes quite an impression in a crowd. And the 33-year-old is a passionate activist—a fighter against fake news.

Maca was one of thousands of Czech democrats marching in Prague last month to commemorate the Velvet Revolution that ended Communist rule. Once again Prague’s activists repeated the words of Vaclav Havel, the author, dissident, and statesman who became the first president of the Czech Republic after the fall of the Iron Curtain: “Love and truth will overcome lies and hatred,” he said.

But Maca and the other demonstrators are only too aware that Russian influence is once again seeping into their country’s body politic, and totalitarianism is creeping back like a disease. To try to wake people up to the threat they used plastic whistles, filling Prague’s Wenceslas Square with shrill notes of alarm.

Czech far-right activists in black uniforms also demonstrated, calling on the Czech Republic to break away from the European Union and get rid of immigrants.

Once again, as in years past, Prague was split between those looking to the East for their future, and those strongly heading toward the West.

“Those who are asleep in European democracies today might wake up in dictatorships tomorrow,” Maca told The Daily Beast. And he did not stop spreading the alarm after that anniversary night.

Maca and his colleagues at European Values, an NGO based in Prague, name and shame those trying to undermine the unity of the European Union.

The group monitors propaganda campaigns, many of which are driven by pro-Kremlin players.

The struggle for truth and European values can be a risky business, even in peaceful Prague these days. Maca receives threats from Czech Facebook users promising to behead, slaughter, shoot, or hang him, or wishing him to die of cancer.

“Most of the EU haters in the Czech republic love [Russian President Vladimir] Putin and [U.S. President Donald] Trump,” says Maca. “They are sympathetic to authoritarian regimes. Putin is the best leader they can choose, as they hope he can break the EU, and punish the West.”

Monitors at the European Values group have counted at least 30 websites spreading pro-Putin and pro-Trump propaganda, as well as conspiracies and hoaxes, in the Czech language. Maca’s latest find was aeronet.cz, a website that lists its address, curiously, as the Trump Building at 40 Wall St. in New York City.

When the The Daily Beast called the phone number in Manhattan, nobody answered. It turned out that aeronet.cz uses the Trump Building as nothing more than a virtual office.

Research by European Values discovered that four years years ago aeronet.cz covered news about aviation. “Then the content changed to Russian propaganda,” Maca told The Daily Beast. “Its domain was anonymously registered in Arizona. A Czech named Marek Pesl was behind that website, who, according to local investigative reporting, had vanished without a trace.”

The website is full of conspiracies. For example one of the latest articles suggested that the Las Vegas shooter, who killed 59 people and wounded more than 500, was working for the CIA: “The attacker never served in the army! There were automatic guns of the National Guard found in the hotel room! Are we witnesses of a CIA operation?” the story began.

But Russian influence is not limited to fringe websites. It’s conspicuous at the top of Czech government.

“I have a dream,” Zeman told Russia’s Tass news agency, “that in the future the Russian Federation becomes a member of the European Union. If you don’t like that, think of the EU is entering into the Russian Federation,” Zeman added before traveling to meet with Putin in Sochi, where the Czech president praised the Kremlin’s leader for successful victories in Syria.

Critics of Moscow’s influence note the disproportionately large number of diplomats at the Russian Embassy. Last year there were up to 140 in Prague and more of them in Karlovy Vary and in Brno.

Igor Lukes, a professor of history and international relations at Boston University, told The Daily Beast that Prague has for more than a decade served as a platform for Russian intelligence and security services, the SVR and the FSB. In addition to regular SVR personnel working under diplomatic cover at the Russian Embassy, there are also numerous agents under non-official cover who operate out of the Czech Republic.

“Furthermore,” says Lukes, “the FSB has recruited a significant number of informers among the large Russian diaspora in Prague, Karlovy Vary, and elsewhere. But perhaps the greatest footprint of Russian special services is visible in the electronic sphere—it seems as if a whole unit of dezinformatsia specialists worked on Czech media.”

The Czech Security Information Service, BIS, said in a report last year that Russian spy activity had increased compared to the previous year, and the interior ministry established a special unit to fight disinformation and propaganda.

Is enough being done to protect Czech democracy and European values?

“I think we have to openly challenge the disproportionate number of Russian diplomats here in Prague,” says Josef Pazderka, a Czech journalist for a leading online daily Aktualne.cz. “It is a shame we are weak, we have to find a solution, even if [Kremlin retaliation] would paralyze the Czech Embassy in Moscow.”

Pazderka’s book Invasion, published last year, focused on the views of Russian soldiers, intelligentsia, and dissidents when Russian tanks rolled into Prague in the spring of 1968 to crush a popular movement against Moscow’s domination.

Havel’s followers do not underestimate the Kremlin’s influence on their country but still do not want to crunch all the country’s domestic problems into the one word, “Putin.”

“The main issue is the low level of trust in Europe and its core values,” Pazderka told The Daily Beast. “We should fight the Kremlin’s propaganda but we should also do more to show Czechs what the European Union really means for them, in real numbers: more than 80 per cent of our exports goes to the E.U.; we’re the second biggest net receiver of E.U. structural funds after Poland. Literally every Czech enjoys new roads, renovated city centers, sewage system renovations, thanks to E.U. funds.”

If Czechs cannot see the benefits of EU membership outside their windows, it has been really hard for the majority to understand the conflict in Eastern Ukraine.

To fight fake news, Prague activist Maca realized he had to see the truth with his own eyes, to be a witness. Three years ago in the midst of the conflict between Ukrainian military forces and pro-Russian separatist militants, Maca read many anti-Kiev stories on Czech websites.

“The articles referred to the Ukrainian authorities as ‘Nazis,’ who control Russian cities and make the Russian-speaking population suffer, so I decided to spend my own money and travel to Ukraine,” Maca told The Daily Beast.

To report his own stories he traveled to the Donbas region of Ukraine in 2015, 2016, and this year. “I traveled on my vacations around Ukraine-controlled towns, along the front line. I asked Russian-speaking people about their life and reported my own stories without any disinformation.”

As soon as the activist published his blog, he received a storm of death threats.

We spoke on the veranda of a café on the corner of Vaclav Square on the anniversary of the Velvet Revolution. A few dozen radicals from the DSSS neo-Nazi party gathered outside the New Yorker clothing store nearby. Some of them were wearing militia uniforms and black sunglasses, although it was a gloomy day. Their leader Tomas Vandas began to yell in the microphone his anti-EU speech, calling for Czechs to get rid of “immigrants, who flood our country like locusts.”

His speech was not much different from ones you can hear these day from far-right activists in Hungary or even in Germany. Maca waved in the direction of the crowd: “There are only a few of them,” he said. “I don’t think that Prague supports [Czech president] Zeman. I hope that Prague is still Havel’s city.”

There were some former devoted democrats among President Putin’s fans in Prague; one of them, former resident Vaclav Klaus, was hailed in the 1990s, as one of the most pro-Western of East European leaders. But he turned 180 degrees right after the annexation of Crimea, according to Lukes at Boston University. “Klaus and a dozen others among the current political elite act as if the Kremlin boss controls their every step. The present Czech leadership recklessly advances the Russian agenda by attacking the E.U., NATO, and the trans-Atlantic partnership, while praising Brexit and Brexiteers.”

The Daily Beast requested an interview with the ex-president; the answer was: “There is no interest in speaking with an American publication.”

Lukes notes that President Zeman’s supporters are interested in good business relations with Russia. “Take President Milos Zeman’s closest, adviser Martin Nejedly—his wealth comes exclusively from Russia and his contacts there; he is said to have Putin’s portrait on his mobile telephone.” The newly elected prime minister, billionaire Andrej Babis, said at a recent press conference that the Czech Republic is “east oriented.”

It made many Czechs sad to see that on the anniversary of the Velvet Revolution their country’s president did not light a candle at the memorial to students beaten by Communist police. The president did not take part in readings of revolutionary, free-thinking dramas at Vaclav Havel Square, nor did the president blow a plastic whistle to wake up democracy.

“This is a bitter pill to see your president skipping the anniversary of Velvet Revolution and going to visit Putin in Russia instead,” said Pazderka. “It’s so sad.”

Vaclav Havel Library Foundation · 10 hours ago
@HavelLibrary
In Terezin, a Nazi camp located in the present-day #Czechia, 33,000 people died. We're thrilled to present a program commemorating the creative spirit of the Terezin artists who perished in the Holocaust. "Our Will to Live" on June 13: https://t.co/uLVw4DqIiQ.
#rehearsalfortruth https://t.co/EKCM0LfmMs
View on Twitter
3
3

Vaclav Havel Library Foundation · 2 days ago
@HavelLibrary
Can a #robot write a play that reflects the world in its current state? Find out at the stage reading of a play created fully by a computer⁉️⁠"Permeation," dir. @Maas_Erwin. June 12, RSVP: https://t.co/H07gDulmJ1.
⁠ #nyc #rehearsalfortruth #vaclavhavel #theater #czech #culture https://t.co/1R5zbBy7zQ
View on Twitter
1
2