The Czech Republic has endured one of its most dramatic fortnights since the Velvet Revolution in 1989, following the government’s announcement that two Russian agents were responsible for explosions at a munitions depot in the Moravian village of Vrbetice in 2014, in which two people were killed. Former prime minister Bohuslav Sobotka expressed the public’s shock perfectly: ‘I would say that this is the largest Russian attack on Czech soil since the invasion in 1968. It is a historic moment, and we must react.’ 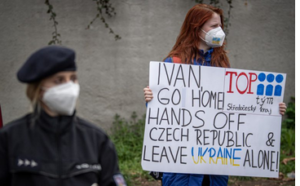 And we have reacted. The Czech government expelled 18 Russian spies working at Russia’s embassy in Prague, provoking a predictable tit-for-tat expulsion of Czech diplomats in Moscow. More important, it may be a turning point for the Czech Republic, if not for Central Europe.

The geopolitical situation in the region has long seemed clear. Poland is firmly opposed to the Kremlin, the Slovaks try to remain invisible, the Hungarians under Prime Minister Viktor Orban are the Kremlin’s placemen in Europe, and the Czechs zigzag, trying not to alienate either Russia or NATO. As early as the end of the 19th century, the poet Josef Svatopluk Machar captured the Czech stance: ‘And we balance our sympathies / from the East in the West, from the West in the East / with the faults of both, but none of their strengths …’

After 1989, when the anti-communist dissident hero Vaclav Havel was president, it seemed clear that we were part of the West and that we wanted to be active members of NATO and the European Union. But Havel’s shining narrative blinded us to what would follow. The Czech elite that emerged in the post-communist 1990s was much more pragmatic. Where Havel spoke of values, others spoke of money. Business and the economy were everything; foreign policy must adapt.

Czech governments weren’t pro-Kremlin. The local mindset reflected more a refusal to commit. We wanted to be in the EU because it meant money, and we wanted to be in NATO because we would be protected. But as soon as we had to show any kind of solidarity, we started walking backwards and grousing. Whereas Roman Catholicism is deeply intertwined with Polish politics, and historical ressentiment still has a powerful influence in Hungary, it’s materialism that plays this animating role in the Czech Republic, whether the government is left or right.

The current prime minister, Andrej Babis, exemplifies this dispensation. Babis wants only money from the EU. When it comes to following European rules, he refuses, saying the Czech Republic isn’t a ‘colony of Brussels’. Paradoxically, this approach weakens our position vis-à-vis Russia, because it creates the impression that we don’t belong anywhere and will go along with whoever pays more.

This stance is enticing to Moscow. Among our leading politicians, two openly advocate pro-Russian politics: former president Vaclav Klaus and his successor, Milos Zeman. After Russia’s invasion of Ukraine in 2014, Klaus apologised for the Kremlin, writing, ‘Ukraine was born after the downfall of Communism as an essentially non-historical state.’ Klaus, the driving force of Czech politics and post-communist economic reform in the 1990s, wants the Czech Republic to leave the EU, and he strongly condemned the government’s response to the revelations about the attack in Vrbetice.

Whereas Klaus is a man of the right, Zeman, the former leader of the Social Democratic Party, revived the non-communist left after 1989. Nevertheless, Zeman, too, has been a staunch defender of Russian interests. Since his presidency began in 2013, he has cast doubt on Russia’s involvement in the invasion of Crimea and eastern Ukraine; attacked Czech intelligence agencies that warned against Russian influence; promoted Russia’s role in completing a local nuclear power plant; and called for the removal of both former foreign minister Tomas Petricek, who was critical of Russia, and former health minister Jan Blatny, who refused to buy Russia’s unapproved Sputnik V Covid-19 vaccine. The list goes on and on.

After the government announced that Russian agents were behind the 2014 attack, Zeman, the country’s head of state, fell silent for seven days. When he finally resurfaced, it was as a Russian propagandist. Nothing is proven, he sneered in a televised appearance. The police are exploring two possible scenarios of the attack, he claimed. They just started investigating everything in the past few weeks.

In fact, the intelligence agencies and police are looking into just one possibility: Russian involvement. Zeman is simply hell-bent on downplaying the importance of the case, and he will happily seek to discredit Czech institutions to do it.

We are nearing a turning point. Many Czechs now understand that we have no choice but to engage with geopolitics and the values that underpin our alliances. We simply have to adopt a clear stance towards Russia. We are a part of the West, which Vladimir Putin’s Kremlin views as an enemy. And this voice of realism is growing in neighbouring Slovakia as well.

Czechs are also beginning to understand that our dependence on Russia is much smaller than we thought. Mutual trade is minimal; our energy supplies are diversified. There is hope that Czechs will realise that, because their own security isn’t at stake, they can be active members of the EU and NATO.

But that will also depend on what others do. Initial Western reactions to the announcement of Russian involvement in the attack on the munitions depot were underwhelming. Pro-Russian websites and politicians seized on this immediately: no one cares, no one believes it, and so forth.

This response strikes a powerful nerve with Czechs. The painful memory of British and French appeasement at Munich in 1938—after which Czechoslovakia found itself facing Hitler alone—persists here. We have learned to observe other countries’ reactions carefully, so that we can judge how great an interest our allies take in us. That is why it was very important that both the EU and NATO soon expressed support for our country, with several NATO members symbolically expelling Russian diplomats.

Parliamentary elections will take place in the northern autumn, and opinion polls suggest a majority for parties that have no love for Zeman and the Kremlin. As the campaign heats up, no one expects Zeman—or the Kremlin—to remain neutral.