We commonly say that historical figures are best known for their deeds. What manner of man was Martin Luther King, Jr.? To answer this question, it would be wise to first look at King’s biography for the deeds and then to his philosophy for the mind behind those deeds. Many people judge King by the story of his life, for to them this story means his deeds. Practically everything has been said about his personal and public life. However, not much has been written about his philosophy. It seems, then, that the answer to the question can be provided only by studying his intellectual evolution. 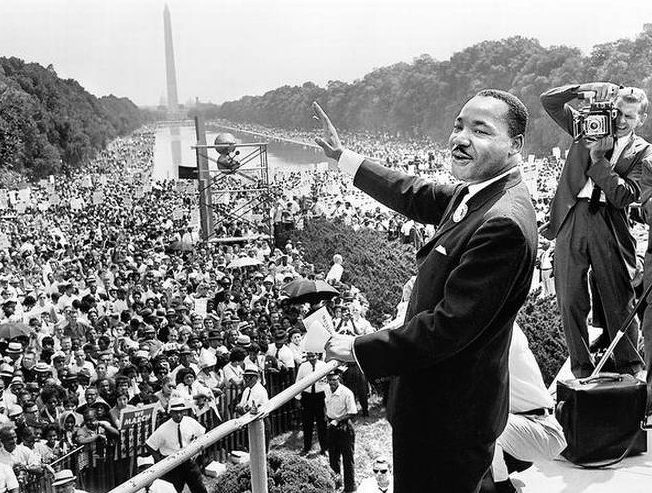 To study King’s philosophy is to study how he grew from being the son and grandson of a Baptist priest to a prophet of non-violence. It is from this that he derived what he later called “a revolution of values” in American society. Revolution is a social, political and cultural transformation that humans bring to their world through what they think and feel and do, and the values that they assign to their thinking, feeling and doing. In the case of King, this value was non-violence. The revolution that accompanied it was the democratisation of America. As such, his greatest achievement is, without doubt, his non-violent struggle against injustice.

King’s practice of non-violence was never separate from his philosophical message of love and justice. His review and reconstruction of Christian love, as a strong argument for the emancipation of blacks, gave support to his integrationist principle of non-violent revolution. He challenged the social and political injustice of American society with ideas and values that met the demands of contemporary humanism and inclusive emancipation.Undoubtedly, what the world needs more than ever is more of the invigorating influence of the ideas of Martin Luther King, Jr. No idea has achieved an impact so far-reaching and so fundamentally humane as non-violence has. Through non-violence comes what the Czech statesman and writer Vaclav Havel called “the power of the powerless”, and King knew that. By learning and preaching this great ideal, he set non-violence upon succeeding decades. And as we study King’s philosophy and his fundamental ideas of love, justice and racial equality, we will find that what made him a genius and a great historical figure is now broadened and refined by freedom fighters and dissident thinkers around the world. It is practically impossible to do justice in describing King’s sacrifices, which changed the course of American history and of the 20th century. However, one can try to uncover the true intellectual genesis of King’s non-violent mind and action by tracing its philosophical foundations and analysing it in comparison with other influential black leaders like Malcolm X.

Both Martin Luther King, Jr. and Malcolm X were African-American dreamers. Their dreams as black Americans captured not only the imagination of America, but also that of freedom fighters around the world. King made his own dream, but he did not make it under circumstances chosen by him, but under the influence of values and ideas that he encountered. As such, to understand King’s philosophy we need to understand the philosophy that made him. Only through an inquiry into his social, political, religious and philosophical development will we be able to understand the nature of his thoughts and the magnitude of his historical accomplishment.

As a matter of fact, it was quite easy for him to think of his non-violence as an empowering philosophy and to be optimistic that it could be socially and politically realised, because he himself was a concrete exemplification of its realisation. His cultural background, along with an excellent education and an acute social awareness, gave King the opportunity to become a civic and moral leader when the time was ripe for racial integration in America. But all these virtues and achievements would not have made a famed civil rights leader of Martin Luther King, Jr. if he had decided to remain in the north, and if Rosa Parks had not refused to give up her seat to a white man. It was not only that King changed the course of American history by accepting the call to preach at Dexter Avenue Baptist Church in Montgomery, it was also his personal life that was altered by the unexpected turn of events that brought together him and the black community in Montgomery. King’s intellectual background as a Baptist minister who had studied theology and philosophy allowed him to be prepared for his historical role as a leader to a mass movement.

King saw more clearly than any of his contemporaries how segregation and American democracy were contradictory. As a philosopher who had read and was influenced by Hegel and his dialectical method, he had a processual conception of American democracy. For King, the concept of democracy necessarily compelled further action against injustice. He was very clear about the difference between democracy as “thin paper” and as “thick action”. This echoed his belief in democracy as a guiding principle of citizen responsibility. Also, King was observing democracy from a comparatively philosophical position, distinguishing between justice and injustice. He argued his right to protest against injustice by referring to authors such as Mahatma Gandhi, Reinhold Niebuhr, Socrates, Paul Tillich, and Augustine.

A dream of solidarity

Martin Luther King, Jr. found himself involved in a struggle for black emancipation and later against economic injustice in America, but he always hoped to be able to transform the black liberation in whose name he was fighting — to transform it first by substituting violence with non-violence and second, by applying the principles of democratisation to social and economic life. In other words, his ultimate optimism about human nature was founded on the belief in the redemptive possibility of non-violence in human history and the institution of reconciliation and the Beloved Community. Accordingly, he saw the African-American non-violent movement as an effort to further democratise American democracy, but he also tried to bring new meaning to it by formulating his own dream as that of desegregation and solidarity.

King thereby laid the foundation for a revolution of values in American society, but also for our world, beyond the ideals and actions of any other American of his generation. He created a new image of America — an image of compassion and justice, which can overcome its own evils of arrogance, pride and prejudice.