President Miloš Zeman ‘says what people want to hear, the way they want to hear it’ — just like Donald Trump. 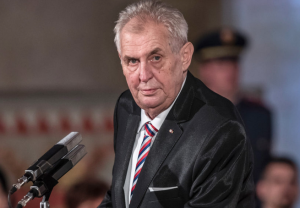 PRAGUE — He’s brash, provocative and blatantly politically incorrect. He recently called 90 percent of Czech Roma “unadaptable” and lazy, and he volunteered to remove a burkini from the body of a Muslim woman. He has been accused of being a racist and a cynical opportunist.

Miloš Zeman is also the president of the Czech Republic. His first term, now drawing to a close, has been marked by declarations that have provoked outrage and disbelief at home and abroad, such as a claim that the recent wave of migrants was a plot by the Muslim Brotherhood to “gradually gain control” of Europe.

The irrepressible 73-year-old, who suffers from type-2 diabetes and related nerve damage, is running for reelection in January. Polls indicate he should easily win the first round but is likely to face a difficult second-round battle against Jiří Drahoš, the respected former president of the Czech Academy of Sciences.

Now busy overseeing the formation of a new government following October’s parliamentary election, Zeman has vexed many Czech politicians by declaring that he would give the billionaire Andrej Babiš, whose ANO party won October’s legislative election, two chances to form a minority administration.

If Babiš — who has been charged with subsidy fraud but may well be pardoned if Zeman is returned to office — becomes prime minister and Zeman is reelected, Brussels would face a formidable tandem in its bid to get the Czech Republic to submit to the European Commission’s will on issues like migration and gun control directives.

It is a reflection of Zeman’s contentious personality and disruptive political career that he is today admired by former foes and vilified by many of his one-time Social Democratic Party colleagues.

“I like the guy,” said MEP Jan Zahradil, a member of the executive board of the center-right Civic Democrats (ODS). “I wouldn’t vote for him, but I have to admit that I like his personality.”

In 2013, Zeman became the first Czech president to be elected by popular vote (previously they were chosen by parliament). The Czech Republic has a history of extraordinary heads of state, such as Tomáš Garrigue Masaryk, a philosopher, sociologist and feminist who founded the state of Czechoslovakia in 1919 and was its first president, and the dissident playwright Václav Havel, who became known for his vision of an egalitarian and inclusionary civil society when serving as the country’s first post-communist president.

In a 1993 interview with the New York Times, when Czech Roma were facing widespread discrimination and racist violence, Havel said the problem was “a litmus test … of a civil society” and called intolerance “the biggest challenge of our time.”

Zeman is the anti-Havel president. Rather than try to combat bigotry, he foments it, fulminating against immigrants and calling Muslims “criminals” who want to impose sharia law rather than integrate.

In comments in 2015 that denigrated Muslims and women at the same time, he said: “Unfaithful women will be stoned, thieves’ hands will be cut off and we will be deprived of the beauty of women because they will have to have their faces covered. I can imagine that in some cases this might be beneficial, though.”

He is an intellectual and quite smart … but he likes to play anti-intellectual notes and this has worked very well for him — Jan Zahradil, MEP

On the same occasion, he said the government should finance the training of armed militias to help defend the borders, presumably against immigrants.

Zeman’s declarations have drawn the ire of the U.N. High Commissioner for Human Rights and the Council of Europe’s European Commission against Racism and Intolerance, which suggested Czech laws should be changed so that politicians like Zeman can be held accountable for such comments.

Miloš Zeman was born in the city of Kolín, about 35 miles east of Prague. His parents divorced when he was two and he was raised by his mother, a teacher. Described as a highly intelligent boy and a loner, he is quoted as saying he does not remember having any childhood friends.

A graduate of the University of Economics, he joined the Communist Party in 1968 during the Prague Spring, but was expelled two years later because of his opposition to the Warsaw Pact’s invasion of his country. He fell afoul of the authorities again in August 1989 over a magazine article.

A TV appearance in which he criticized the economy led to an invitation to join Václav Havel’s Civic Forum during the Velvet Revolution. He joined the revived Social Democrat Party, which had been absorbed by the ruling Communists in 1948, not long afterwards and was elected to the Chamber of the People of the Federal Assembly in 1992. A year later, he became party leader.

For much of the 1990s, the Czech political landscape was dominated by the Civic Democratic Party, led by the fractious former Prime Minister and President Václav Klaus, and Zeman’s Social Democrats (Zeman was also prime minister, from 1998 to 2002). Their scraps were often virulent and, on occasion, personal.

Zahradil, who was a longtime advisor to Klaus, and Dienstbier see eye-to-eye on one thing: Zeman is “absolutely individualist,” the former said. “I would say he is probably the most individualistic person you will find in politics.”

“He is a very self-oriented person,” Dienstbier said.

Both men also agree Zeman is intelligent, educated and articulate. “He is an intellectual and quite smart,” said Zahradil. “But he likes to play anti-intellectual notes and this has worked very well for him.”

To Zeman’s consternation, it was longtime foe Klaus who became president. According to Zahradil, “Zeman is a person with a very long memory and he usually doesn’t forgive. He has been quite successful in destroying all his former political opponents.”

When Zeman ran successfully for president in 2013, Dienstbier stood against him, in part because “Zeman has no ethical limits,” as he put it. He believes Zeman’s transformation from Social Democrat to anti-immigration firebrand was gradual. “You could see it happening already during his time as prime minister. He is pragmatic. If he sees something is useful for his political career, he does not hesitate to use it.”

“He used the lowest emotions to divide the nation, because of a migration crisis that does not exist here. He made people afraid and then played their protector. The rise of populist parties and the division of society was created in large part by his presidential steps,” said Dienstbier.

But while Dienstbier detects a lack of sincerity in Zeman’s virulent remarks, others think he’s in earnest.

“I think he is partly racist,” said Jakub Charvat, political scientist at Prague’s Metropolitan University, recalling some controversial statements about Palestinians from Zeman’s spell as prime minister. “But I think [the anti-Muslim rhetoric] is also part of a political campaign that Zeman and his team have waged during his five-year term.”

In that, he resembles Donald Trump. “He was one of the first world leaders to congratulate Trump after he was elected,” Charvat said. “And he told Czechs that Trump was just like Miloš Zeman.”

But, in keeping with his maverick nature, he criticized Trump less than a year later, saying the U.S. president’s speech at the U.N. “reminded me of a teacher publicly handing out grades to misbehaving students. But the international community should not be a relationship between master and student.”

Charvat accused Zeman of undermining government foreign policy on EU sanctions against Russia and human rights in China, and said Zeman is frustrated because — as the president himself said on TV last month — he believes a directly elected president should have greater veto powers, the right to submit bills to parliament and the right to make decisions that do not require the prime minister’s approval.

Zeman declined to speak with POLITICO for this article, saying through his spokesman, Jiří Ovčáček, that he did not have time. However, Ovčáček said in response to written questions: “The President’s priorities are the sovereignty of the Czech Republic, freedom and democracy. His goal is a self-confident country.”

Ovčáček went on to say that Zeman is “pleased that the country is a member” of the EU and NATO, “but we have to strive for economic opportunities, for example, in China, Russia, Vietnam or India.”

“For me personally,” he said, “Zeman guarantees the sovereign, free and honorable development of the country, and guarantees as well that in the Prague Castle is a president who really listens to the people.”