One has felt the loss. The slow erosion of the moral high ground that once belonged and still belongs to a unique and visionary generation of ANC leaders and activists who are celebrated across the world. 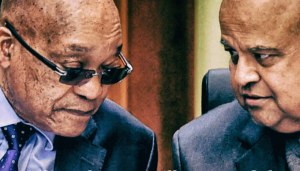 There are streets, libraries, bridges, squares and buildings, some in the furthest corners of the the globe, named after some of these leaders. Tambo, Mandela, the Sisulus, Kathrada, Slovo, Hani, Winnie Mandela, Gertrude Shope, Charlotte Maxeke, Cissy Gool… the list is inspiringly long.

None were angels, but they all belong now to the ages.

They have left us to get on with fulfilling the dream that animated the lives of these founding mothers and fathers.

It was a dream, mostly, and a destination – freedom – driven by the ideas of justice and equality, of respect for human rights, of returning a land to those who suffered dispossession and ruthless persecution. Of not stooping to the level of the oppressor. Of climbing the arduous and sometimes treacherous slopes towards this illusive moral higher ground.

There are those who have always maintained that these ideals – in the real, cut-throat mortal combat that is political life and government – are naive and quaintly old fashioned.

It was former dissident, poet, playwright and Czech statesman, Vaclav Havel (1936 – 2011), who helped alter the course of history in Eastern Europe in the 1980s and who captured the powerful potential of hope in an essay on the subject.

Havel had spent 20 years being hounded by the secret police and after his election as president of a free Czechoslovakia he attempted to define what this meant.

We have become morally ill because we are used to saying one thing and thinking another,” said Havel, adding, “We have learned not to believe in anything, not to care about each other.

Complete scepticism” was, he said, “an understandable consequence of discovering that one’s enthusiasms are based on illusion. This scepticism leads to a dehumanisation of history — a history drifting somewhere above us, taking its own course, having nothing to do with us, trying to cheat us, destroy us, playing out its cruel jokes.

But history, he then reminds us, “is not something that takes place elsewhere; it takes place here. We all contribute to making it. If bringing back some human dimension to the world depends on anything, it depends on how we acquit ourselves in the here and now”.

Reading the leaked 68-page submission by Pravin Gordhan to the Zondo Commission of Inquiry into State Capture, one is reminded that traces of what animated our founding leaders still remain.

It has not yet been entirely snuffed out, although it has, in the past decade, been obscured by the stench of industrial-scale corruption which has consumed the ANC, its heart and its mind.

It matters greatly that former Minister of Finance and current Minister of Public Enterprises, Pravin Gordhan, begins his submission to the Zondo Commission with what he has titled the “political context” of his membership of the governing party and in so doing his role as a Cabinet minister.

“I am a life-long activist and member of the African National Congress. I believe in the principles of the Freedom Charter and in our Constitution. I am committed to contributing to the achievement of constitutional democracy and the establishment of a democratic government guided by the preamble of the Freedom Charter that South Africa belongs to all who live in it, black and white, and that no government can justly claim authority unless it is based on the will of all the people.”

Gordhan notes that the preamble of South Africa’s Constitution calls upon and commits government to uplift the poor, “as do the objectives of the ANC”, and also to “eliminate inequalities, promote economic development for the benefit of all and to create a society in which social justice and economic emancipation occur within a far-reaching transformation of society”.

This transformation, he tells the commission, is “multidimensional; political, institutional, social, economic and cultural. But transformation and transitions also can unleash the forces of greed, corruption and new means of exploitation.”

Participation in government as an ANC cadre was not, said Gordhan, “just a technical or technocratic role” but is one “aimed at achieving a vision and goals of our leaders”.

(He meant the old guard, not the generation of looters that arrived when Jacob Zuma opened that door.)

“In contrast, State Capture and corruption are consequences of the unleashing of the worst-human instincts – self-enrichment, neglect of the higher mission, placing one’s self-interest before the community’s interests,” said Gordhan.

“Reflecting on the period 2009 to 2017 now, it would appear that I was witness to events, some of which are set out below, and it seems an unwitting member of an Executive in the earlier part of this period, which was misled, lied to, manipulated and abused.”

This was done, he said, in order to “benefit a few families and individuals, release the worst forms of recklessness and corruption, rob ordinary people of schools, clinics and education, abuse and decimate key institutions of our democracy, including SARS, the Hawks, NPA, SoEs like Eskom, Denel, Transnet etc, and damage the economy, increasing joblessness, forsaking the youth and increasing the marginalisation of women.”

State Capture had evolved, he said, into “a sophisticated scheme or racket that advanced false narratives, including racist pejoratives, used external agencies, like Bell Pottinger and the services of professional advisers, including management consulting firms, auditors and lawyers to entrench itself.”

It also marginalised and dismissed honest public servants and had them replaced with “compromised or incompetent individuals and allowed a climate of impunity in respect of crime and corruption”.

“Congruent with these resolutions [taken at the ANC’s elective conference in 2017] and with the dictates of my conscience, I provide this statement to the Commission in the hope that it assists the Commission in its important work to uncover the truth of State Capture, and to ensure that it can never occur again.”

Gordhan informs the commission that his knowledge and understanding of State Capture – like that of the rest of the country – evolved over time.

“What I know now to have been significant events did not appear to be so at the time. The significance and the inter-relationship of such events were revealed progressively and often only in hindsight. Repeated changes to Cabinet, to the Boards of State-owned Companies, and in the leadership of key institutions and organs of state, often without rational explanation, were done to take control of such institutions. This would be followed by the plunder of resources within those institutions, without the risk of prosecution.”

It was in this context, he said, that the events that took place between 2009 and 2017 should be viewed.

Gordhan and officials like him, many of whom have already testified at the Zondo Commission, as Havel noted, are contributing to history here and now.

Their commitment and their steadfast resistance in the face of persecution by their own comrades will serve in future as a reminder of a thirst for justice not only in South Africa’s founding Constitution but also in the DNA of its citizens.

Those who have abused the mandate to serve, to enrich themselves and their families, have been exposed.