Disbelief and a hint of fear flashed across Zuzana Čaputová’s face as the news broke. 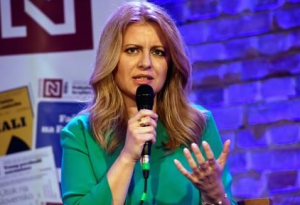 After explaining to the Guardian how she would bolster the rule of law in Slovakia if elected president, Čaputová, a 45-year-old lawyer and the frontrunner in Saturday’s presidential poll, suddenly stopped short as an aide read out a headline from his phone: Marian Kočner, a multi-millionaire businessman, had been charged with ordering the murder of Ján Kuciak, a journalist who was investigating organised crime.

“Wow, I’m surprised, because I was on an opposing side in a legal conflict with Marián Kočner,” she said, startled momentarily into speaking in English, when she had previously been communicating through a translator.

The killings in February last year of Kuciak, a journalist with Actuality SK website, and his fiancee, Martina Kušnírová, provoked widespread revulsion and prompted Čaputová to run for office after thousands of Slovaks took to the streets demanding political change and an end to corruption.

News of the charge against Kočner seemed to show hope for her faith in the power of popular participation to effect change. “People really need evidence and confirmation that these things will be investigated and that justice will be served to regain trust in the process,” said Čaputová, who has urged citizens to get involved in public life to preserve liberal democracy.

Čaputová was virtually unheard of until recently, but her soothing message of decency and civility – inspired, she says, by Gandhi’s book The Story of My Experiments With Truth, and by her political hero, the late former Czechoslovak president and anti-communist dissident Václav Havel – has propelled her into a commanding lead over a large field of candidates, leaving her heavily favoured to win an expected second-round ballot on 30 March.

Voters have rallied to her despite her publicly declared tolerance of LGBT rights such as civil partnerships and adoption, controversial positions in a predominantly Catholic country that forbids same-sex marriage and is known for conservative attitudes.

The election of such an avowedly pro-western figure, who openly favours the Nato alliance and EU membership, would provide welcome relief to liberals at a time when neighbouring countries, namely, the Czech Republic, Hungary and Poland, are led by populist politicians of varying stripes.

Slovaks point out that Čaputová would cut a contrasting profile with the Czech Republic’s pro-Moscow, migrant-baiting president Miloš Zeman – calling it a rare role-reversal in the relationship between the two countries that were once joined together in the former Czechoslovakia before its peaceful dissolution into separate independent states in 1993.

“When the Czech Republic joined Nato and the EU in the 1990s, we were left behind and [former US secretary of state] Madeleine Albright called us the black hole of Europe,” said Michal Katuška, a senior correspondent and presenter at Slovak national radio. “But now it looks like Slovakia will become, in neighbourhood terms, the half-eyed nation among the blind.”

Čaputová, however, cautioned that her election could be a double-edged sword, providing rightwingers with a stick to beat liberals. “I do believe that my election can serve as an inspiration or motivation to some elsewhere,” she said. “But it could also work the other way around.”