The Russian invasion of Ukraine has driven home the importance of NATO and the European Union for many of their newest members, according to Czech Foreign Minister Jan Lipavsky, who was in Washington this week for the funeral of Czech emigre and former U.S. Secretary of State Madeleine Albright.

“The reason we joined these two organizations is that it won’t happen to us,” Lipavsky, said at an event hosted by the Atlantic Council.

The fact that Ukraine did not manage to enter the two Western institutions “created a gray zone” that Russian President Vladimir Putin exploited, said Lipavsky, who had discussed the challenge facing Ukraine, among other topics, in an interview with VOA earlier in the day.
The people of Ukraine “want to be part of the Western society, they want democratic elections, they want freedom of speech,” and they want to enjoy the prosperity that comes with them, he said. “I feel our moral responsibility to help them.”

Lipavsky is part of a newly sworn-in coalition government comprising both conservatives and progressives. Led by Prime Minister Petr Fiala, the new Czech administration is expected to pursue an internationalist foreign policy that promotes democracy and human rights, harkening back to an era when the country was led by playwright-turned political leader Vaclav Havel.

On his limited itinerary in Washington, Lipavsky paid tribute to Havel, who is memorialized in what is known as the “Freedom Foyer” of the U.S. Capitol’s Statuary Hall. There, his bust sits in close proximity to those of Winston Churchill, Abraham Lincoln and George Washington.

Lipavsky gifted his American hosts with a collection of Havel photographs, including photos of Havel with Albright, who was born in then-Czechoslovakia and whose father was a member of the Czechoslovakian diplomatic corps.

The friendship between Havel and Albright was stressed by Lipavsky and other Czech dignitaries who came to Washington for the funeral. Among them were Czech senate president Milos Vystrcil, the senate foreign affairs committee chairman and three former ambassadors to the United States. 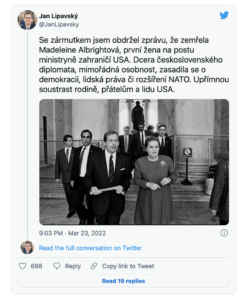 Albright is credited with having played a critical role in ushering the Czech Republic and other Central and Eastern European countries into NATO.

“Madeleine Albright made that possible, because she knew — she had suffered the consequences of policy failures, including American policy failures” in the 1930s and ’40s, said Daniel Fried, a former U.S. ambassador to Poland, at the Atlantic Council event alongside Lipavsky.

“Vaclav Havel, along with Poland’s Lech Walesa, pushed [then U.S. President] Bill Clinton on NATO enlargement,” Fried recalled. “One of their arguments was — I was around, I remember — ‘we have a window now to do it, don’t you Americans blow it!’ ” 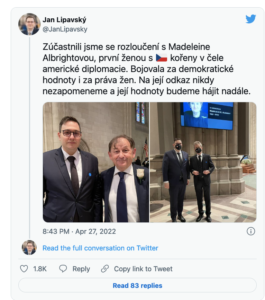 Fried added that Havel and Walesa might not have “quite put it that way, but that was more or less their way, what they were saying.”

Speaking to VOA earlier by telephone, Fried took issue with widespread reports of “backsliding” on democratic governance in the former Soviet bloc countries of Central and Eastern Europe. “Except for Hungary,” he said, he sees the countries in the region “going back to their roots” of fighting for freedom and democracy.

Lipavsky, for his part, said he believes the countries of the region are attracted to the West by its “democratic identity.”

“This identity is built upon the vision that every person can pursue his and her own happiness, and you have very basic values like human rights, rights to own [property], rights to think, freedom of speech,” he said. “Baltics, Central and Eastern Europe, want to be part of that, is part of that.”

The Ukrainian people are “literally fighting and dying” for the very same choice, he said, and the Czech Republic will do its utmost to help them to prevail against Russia and become a member of the club of like-minded nations that is the EU.