In a new book, Nadya Tolokonnikova uses what she’s learned as a member of the Russian dada/punk band about how to best challenge those with entrenched power.

Nadya Tolokonnikova readily admits that the political protest her group Pussy Riot undertook on February 12, 2012, was a total disaster. On that day, five members of the group entered the Cathedral of Christ the Savior in Moscow and launched into a song they called “A Punk Prayer: Mother of God, Drive Putin Away.” Arrested almost immediately, three of the members were charged with ‘hooliganism,’ and eventually sentenced to two years in prison. 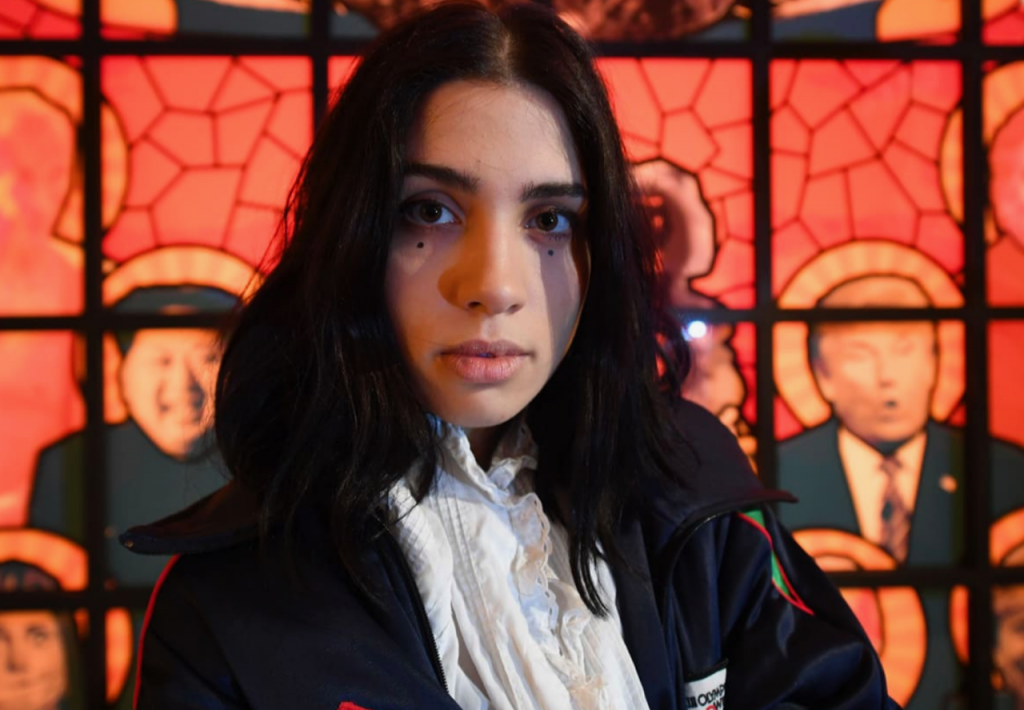 One of them was Tolokonnikova who, in her new book, Read and Riot: A Pussy Riot Guide to Activism, claims that “the action in the Cathedral of Christ the Savior was horrible on the whole. We didn’t accomplish most of what we intended—we didn’t even get to the refrain of the song. We did not have enough footage to make a good music video. Oddly enough, we were sent to prison for the worst Pussy Riot action we’d done.”

And yet the brazenness of that fiasco, combined with the harshness of the response, made Tolonnikova and her cohorts global superstars—the face of the anti-Putin movement.

Read and Riot, which was partially inspired by notes Tolokonnikova wrote shortly after her release from prison in 2014, is a grab bag of dada/punk aesthetics, revolutionary rhetoric, autobiographical snippets, activist DIY tips and you-name-it. There are shout-outs to left-wing icons like Vaclav Havel, Saul Alinsky and Eugene V. Debs; short sections labeled “Heroes,” which feature riffs on Martin Luther King, radical activists The Yes Men, the Berrigan brothers, and others.

Chapter headings include “Take Back the Joy,” “Commit An Art Crime,” and “Make Your Government Shit Its Pants.” Numerous sidebars include everything from how to make a Dadaist poem (cut up a newspaper article, shake the pieces up in a bag, then pull out pieces at random and write down what they say) to “Terms all members of the resistance should know,” which include ‘greed,’ ‘impeachment,’ ‘obstruction of justice’ and ‘pussy’ (“Something you’re not going to get without a riot. No riot, no pussy.”).

In Read and Riot, Tolokonnikova comes off as arrogant, naïve, extremely well read (she is fluent in English and includes an extensive reading list at the back of the book), self-aware and, given her political activism in a repressive society, very committed and very brave. She can be funny describing some of Pussy Riot’s staged events, but her p.c. verbiage and occasional anti-establishment riffs can seem overly didactic. Given these characteristics, and her hard to ignore good looks (“I don’t mind being called beautiful or even being beautiful. But I don’t want to be too busy being beautiful,” she says in the book), it’s no wonder she’s become something of a global superstar.

“When I was writing the book, it felt to me more like writing poetry rather than serious political essays,” said Tolokonnikova in an email interview with The Daily Beast. “When it comes to poetry, it’s all about intuitions, insights, emotions, guesses, beliefs, rather than something that’s trying to appear scientific or objective. I was collecting a bunch of feelings and spontaneous thoughts that motivated me to act. In that way this book is an act of automatic writing, if you wish.”

Tolokonnikova grew up in Norilsk, a dreary, heavily polluted Siberian industrial city in which the life expectancy is ten years less than the rest of Russia and the risk of cancer two times higher.

“Norilsk is one of the most polluted cities on Earth,” Tolokonnikova said. “And also one of the coldest. -40, -45 in the winter. Winter lasts for 9 months. No sun for 6 months. You’re living on Pluto, I thought when I was a kid that I’m living on a cosmic station on Pluto. Norilsk makes you a nerd. You cannot walk, cannot run, cannot hang with your friends outside like normal kids do. You sit home and read books.”

Needless to say, Tolokonnikova couldn’t wait to leave the place, and did so when she attended university in Moscow. That’s where she ran into an art/punk crowd and where, inspired by riot grrrl punk magazines and the dada artistic movement of the early 20th century, Pussy Riot was founded in 2011.

“Dada taught me that art can be a more accurate and appropriate analysis of society and cultures that experience extreme political turbulence,” Tolokonnikova told the Beast. “Punk culture taught me that concept, attitude, and position is superior to craft and high-quality production.”

This punk/dada mindset means, says Tolokonnikova in her book, that “if Pussy Riot needed to define their job somehow, they’d say that their job is being ridiculous. Being ridiculous is one of the best ways to tell the truth.”

It’s also a great way to stage eye-catching events. Like the time the group projected a giant Jolly Roger skull and crossbones on the Russian White House. Or when they welded shut the door of a restaurant owned by an ultraconservative, pro-Putin journalist.

None of this sat well with the Russian establishment, which is why members of Pussy Riot ended up in jail following the cathedral action. Read and Riot contains some harrowing reminiscences of Tolokonnikova’s time in jail—beatings, bad food, hunger strikes—but in some ways, she sees the experience as a positive one.

“When you’re a political prisoner, notoriety is always good for you,” Tolokonnikova wrote in her email. “You talk more about political prisoners. Spread awareness. Make actions in their support. It helps a prisoner morally, and it creates a protection, say, it’s less likely that you’ll be beaten or tortured if the prison officials know that there are people behind your back.”

But there is, of course, a down side: “A negative consequence for us was losing our anonymity,” said Tolokonnikova. “It’s easier to do guerrilla art when the officials could not identify you.”

That has not stopped Pussy Riot from engaging in further protests, the latest of which occurred in July, when members of the group dressed as police stormed the field during a World Cup match. That action seems to have really infuriated Russian officials, leading to what German doctors have said was the Berlin poisoning of Pussy Riot member Pyotr Verzilov last month. Tolokonnikova sees this as a definite government escalation in its campaign against the group.

“When I was in Berlin we noticed that we were followed by two men who looked like someone from Russian law enforcement agencies, without uniforms, obviously,” she said. “It happened on Saturday. On Sunday, 23rd September, one of our comrades, Hunter Heaney, the head of “The Voice Project” and Verzilov’s colleague on the investigation in the Central African Republic [involving the murder of several Russian journalists] , left the hospital where he visited Peter and went down the street. He soon realized that he was followed by the red car. He stopped, turned around, and went back to the hospital. The car made a U-turn and kept following him. It was the same man in the car who we’d seen on Saturday. At the hospital Hunter called the police. Since Sunday Peter and the rest of our team in Berlin are under police protection, they literally cannot make a step without police guarding them.

“So yes, I think we can see an escalation.”

Despite all this, the members of Pussy Riot remain committed to their activism. And in Read and Riot, Tolokonnikova says there are plenty of signs that positive changes are coming. Not just in Russia, but around the world.

“In Russia, for many (very) young people (13-20 years old) it’s not obvious at all why Putin should be in power,” she told the Beast. “They question the lack of democracy, the absence of real independent media, and the crazy fact that one man is in power in our country for 18 fucking years. They’re just different. They care about decentralization, about community, about equality. I see the same trend in other countries, too. Young people are voting for change. For Sanders in the U.S., for Corbyn in the U.K. Rights for them are not only abstract human rights, but they have to be supported by real deals like a fair share of wealth, affordable healthcare, and education.”

And for those who might be skeptical, who think that Pussy Riot and its ilk are incredibly naïve children, playing at revolution? Tolokonnikova has a simple response: “A spark lights the fire as they say. Right?”