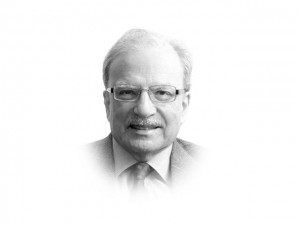 Source: The Express Tribune / By Shahid Javed Burki /
I will begin this discourse on political leaders as heroes with some admittedly debatable observations. After years of following Pakistan’s halting development as a nation, as a political system, and as an economic entity, I have come to believe that without political advance Pakistan cannot make economic progress. This is true for most developing nations, not just Pakistan. Exceptions to this rule are the miracle economies of East Asia and China. These were able to develop their economies rapidly without making political progress. By ‘political progress’ I mean the development of systems that are representative of the people. They are, in the words of Daron Acemoglu and James Robinson in their book, Why Nations Fail? inclusive in their structure rather than exclusive. In the way they operate.

This brings me to the point of defining leadership: a difficult task. I have a list of a scores of leaders who have shaped Pakistan. Of these only one was a woman. Among them I can find only two heroes and one who has the potential of becoming one. The rest did not measure up to my definition of political heroes. I will define the meaning of political hero by using a foreign example. However, before getting to that point, a few words about Pakistan’s history would be appropriate.

Pakistan’s birth was difficult. Many expected the country would not survive. From 1947, the year of the country’s birth, to 2015, as the country seeks to sail through a perfect storm, it has faced many crises. Most other crises were ably managed by the leaders who showed the same kind of resolve displayed by the first set of leaders. But the latter group of leaders did not produce heroes. This leads one to ask the question whether the country has the leadership in place that can meet the challenges of 2015.

For an answer let me quote from a review of a recent biography of Vaclav Havel, modern Czechoslovakia’s first leader, by the highly respected American journalist, Michael Ignatieff. “Heroism is essential to politics,” he writes in The Atlantic. But “we are short of heroes everywhere these days, but particularly in politics … To find courage in the political realm, to remember what it can do to transform our hopes for politics itself, we have to go back to the canonical leaders of 1989 and 1990. The times demanded bravery, and leaders aplenty rose to the occasion. Gorbachev showed courage in not using force to hold his empire together. Mandela’s toughness and magnanimity guided South Africa from apartheid to black majority rule. In Poland, the shipyard worker Lech Walesa led his country to freedom. In Czechoslovakia, a play-wright named Vaclav Havel defied imprisonment and intimidation to become the president of a free country.” Ignatieff concludes his essay with the thought that “we tend to think of heroism as mysteriously individual, but Havel’s life teaches us that it is in fact a social virtue”.

In reflecting about Pakistan’s future — the future of the Pakistani state as a political entity as well as an economic enterprise — I am reminded of a statement by Havel, while he led his country’s fight against rule by the Soviet Union and the Communist Party. “Isn’t it the moment of most profound doubt that gives birth to new certainties? Perhaps, hopelessness is the very soil that nourishes human hope; perhaps one could never find sense in life without first experiencing its absurdity.” I believe the statement appropriately defines Pakistan’s current situation. By Shahid Javed Burki