HAVANA – Dissident Cuban graffiti artist Danilo Maldonado, known as “El Sexto,” who arrived on Monday in Havana, has found his ex-wife and daughter there after three months of receiving no news from them, he told EFE. 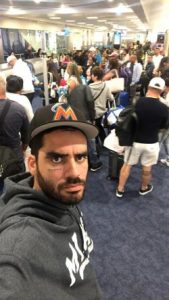 El Sexto traveled to the Cuban capital from Miami and told EFE by telephone that shortly after he arrived at his former home there he received a text message from his ex-wife, Alexandra Sagaro, assuring him that both she and their daughter Renata Maria were doing fine.

The Cuban graffiti artist, who has lived in Miami for a little more than a year, said that he hopes to be able to see his daughter on Monday afternoon and plans to remain on the communist island until the end of March to be able to resolve certain family problems.

In a post on his Instagram account from the Miami International Airport before departing for Cuba, El Sexto wrote that “I’m coming (there) for you,” and suggesting that the Cuban “dictatorship” was “responsible” for anything that might happen to Sagaro and Renata Maria, both of whom have British nationality.

The artist said that Sagaro has not collected the food subsidy he sends her to help support Renata Maria, a situation that led him to suspect that something could have happened to them on the island.

According to his account, shortly after he arrived at his former home in Havana three State Security agents showed up to inform him that their department had nothing to do with the presumed disappearance of his ex-wife and daughter.

Earlier, in another Instagram message posted on Saturday, Maldonado has said that the pair had been “kidnapped” in Havana, where he claimed that they were being held “prisoner” in their home, and he denounced the Cuban authorities for “confiscating” their passports.

Maldonado left Cuba after being arrested for painting the words “Se fue” (He’s gone) on the facades of buildings in downtown Havana on the night iconic Cuban leader Fidel Castro died in November 2016.

Maldonado also spent 10 months under arrest in 2015 for staging a performance titled “Animal Farm,” after the George Orwell book, during which he released two pigs painted green with the names Fidel and Raul written on their hides – referring to Fidel Castro and his brother, Cuban President Raul Castro.

During his imprisonment, Amnesty International declared Maldonado to be a prisoner of conscience and the Human Rights Foundation awarded him the 2015 Vaclav Havel International Prize for Creative Dissent.