The work of Czech playwright and later on president Vaclav Havel and the history of Czech dissent is the inspiration for the site-specific immersive show The Vanek Trilogy: Living Room Soirees. 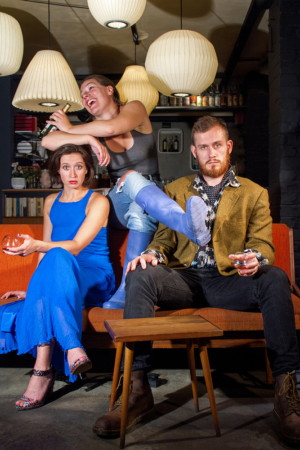 Reviving the practice of living room theatre ONEOHONE Theatre Company presents an interactive and modernised interpretation of Havel’s short plays; Audience, A Private View and Protest, casting the audience in the role of Vanek, the main protagonist and Havel’s alter ego, and staging the shows in private homes across London.

‘One could never find sense in life without first experiencing its absurdity.’ – Vaclav Havel

The audience will step into the world of Vanek, where the life of Czech dissidents in the 1970s meets contemporary London. Here, totalitarianism is replaced by capitalism and freedom of artistic expression is assured… but are people and the choices they make any different? In the role of Vanek the audience will visit the affluent couple Michael and Vera for a house warming party, drink with the master brewer and learn how to avoid surveillance with Stanek.

Reviving the living room phenomenon, established by Czech intellectuals and artists, who when being denied access to public space by the authorities turned their private homes into theatres , ONEOHONE Theatre Company bridges the private and public realms to engage with local communities around London. Paying tribute to the Czech dissidents during the times of Charter 77 – a Czechoslovak civic rights movement of forty years ago – ONEOHONE Theatre Company is bringing theatre directly into people’s homes.

Inspired by Václav Havel’s Vanek Trilogy (Audience, 1975; A Private View, 1975 and Protest, 1978), which was banned during communism and explores moral compromises that characterize life under a totalitarian political system, the production pokes fun at pretension, hypocrisy and conformity. It focuses on the intimate setting allowing actors and audience to interact with each other and their changing surroundings to create a fresh and deeply personal artistic experience.

Václav Havel (1936 -2011), Czech playwright, former dissident and later on president of Czechoslovakia (1989 – 1992) and Czech Republic (1993 – 2003) is known for absurdist, satirical examination of bureaucratic routines and their dehumanizing effects in his plays such as The GArden Party (1963), The Memorandum (1965), the Vanek Trilogy (1975-78) and Leaving (2007). Banned from the theatre after the 1968 Soviet Invasion Havel has become more politically active founding several dissident initiatives such as Charter 77. He was repeatedly arrested and served four years in prison for his activities on behalf of human rights in Czechoslovakia. He is considered by some to be one of the most important intellectuals of the 20th century.

ONEOHONE Theatre Company is a performing arts group founded in 2009 to develop new, accessible and democratic approaches to theatre. It performed its critically-acclaimed signature piece, 101, throughout the UK and in Croatia as part of the NU:Write Festival. It has also created immersive adaptations of several classic texts, including ‘Dracula’, ‘Woyzeck’ and Jane Austen’s ‘Emma’. Visit www.oneohone.org for more information.

Artistic Director Asia Osborne has directed all the company’s shows, and her credits as a freelancer include ‘Romeo and Juliet’ (Broadway Theatre), RWR nights at Theatre 503, ‘Balls’ (Old Red Lion), ‘Spring Awakening’ (Camden People’s Theatre), ‘Romeo and Juliet’ (OUDS Gala, Oxford Playhouse), ‘A Puppet’s Tale’ (Old Vic) and ‘The Bacchae’ (touring the UK and California). She completed The Young Vic’s Springboard Course in 2011, and was Director in Residence for Eton College in the 2012-2013 academic year.

The Czech Centre’s mission is to actively promote the Czech Republic by showcasing Czech culture in the UK. Its programme covers visual and performing arts, film, literature, music, architecture, design and fashion. As well as hosting its own events, the Czech Centre offers support for other groups organising Czech related initiatives in the UK. Go to www.czechcentre.org.uk for more