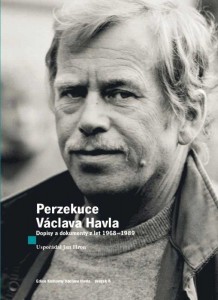 Prague, Nov 26 (ČTK) — A new book of texts by former Czech president Václav Havel (1936-2011), including some that were never published before, reflects his persecution and repeated imprisonment as a leading dissident under the communist regime, publisher Jan Hron told the Czech News Agency today.

The book, on which respected historian Jiří Suk cooperated, has been issued by the Vaclav Havel Library and presented within a conference on the prospects of an interdisciplinary enquiry into the history of jail sentences in Czechoslovakia of the 1970s and 1980s today.

For the first time, the book presents letters that Havel wrote, for example, to writers Pavel Kohout, Jan Vladislav and Josef Škvorecký.

It also offers the assessments of Havel, completed by prison authorities, and documents on various punishments imposed on him as prisoner for misdemeanors.

The documents from prison show that Havel was bullied and his prison stay was far from comfortable, which some tend to believe.

“The [hardline communist] regime forced the famous playwright, who was ousted from the public and cultural life after 1968 [Soviet-led invasion of Czechoslovakia], to become a full-time-job dissident against his will. At the same time, his great talent surfaced and this is also the period of the rise of Vaclav Havel as [an author] known worldwide,” Hron said.

From January to May 1977, he stayed in custody before being given a 14-month suspended sentence for harming national interests abroad.

For the second time, he stayed in custody from January to March 1978.

In May 1979 he was arrested and spent the following five months in custody. In October of the same year, he was sentenced to 4.5 years in jail for subversion. From the autumn of 1982 he suffered from repeated pneumonia. In February 1983, the authorities interrupted his imprisonment for health reasons and ordered his home arrest.

“The book of letters, interviews, reports, and protocols from police questionings and court proceedings shows Havel as a man who did not fear to wage an uneven battle against the communist regime,” Suk writes in the book’s preface.

After the collapse of the communist regime in Czechoslovakia, Havel was elected the first post-communist president in late 1989. He was the first president of the independent Czech Republic in 1993–2003.