Before winning Slovakia’s presidential election in March, Zuzana Caputova won battles for the environment, for her hometown, her country and, even, for Europe. The coronation of this activist lawyer augurs well for equality and transparency at the highest level of politics in Europe. 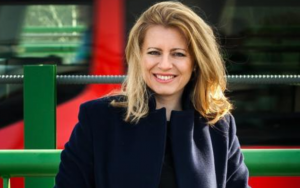 What would you like for your birthday… how about the keys to the country? On June 15th, just a few days short of her 46th birthday, Zuzana Caputova will be sworn in as Slovakia’s first female president. The divorced mother-of-two seduced the electorate as a political novice and champion of the downtrodden. With 58% of the vote, she comfortably beat her rival, ruling party member and EU commissioner Maros Sefcovic, on the March 30th, who showed no hard feelings in the aftermath of his defeat, “I have just called Zuzana Caputova to congratulate her on her victory. I am sending her a bouquet of flowers, because the first female president of Slovakia deserves as much.”

Except that it’s a good bet this strong independent woman is expecting more than flowers from the political class. She campaigned on an anti-corruption ticket and has promised greater transparency in politics, more environmental protection and equality between the sexes. A conservative country, Slovakia has nonetheless elected someone who is pro gay marriage and for adoption by gay couples. Her life has proved that Caputova is capable of moving mountains. Working at her own law firm, her biggest battle to date was against a toxic landfill in her hometown of Pezinok, a commuter town half an hour’s drive from Bratislava. For years, her family lived in an apartment adjacent to the massive dump, which covered an area the size of twelve football pitches. They could not open their windows because of the stench. Inspired by Gandhi and Vaclav Havel, she became a self-styled David against the Goliath of big business.

For more than 14 years she waged a legal and administrative battle to shut down the town’s landfill, which contained the municipal waste of many towns, including the capital, Bratislava. Using scientific data, she was able to prove a link between the presence of waste and high levels of illness among the people of Pezinok. In protesting the landfill, she led the biggest grass-roots movement in the country since the Velvet Revolution. Success came in 2013 when the Slovakian Supreme Court cancelled the landfill’s license.

Beyond local and national victories for the little guy that earned Caputova the nickname ‘the Erin Brockovich of Slovakia, she managed to change European legislation when the European Court of Justice introduced new rules regarding public consultation on urban projects. Her work saw Caputova earn the Goldman Prize in 2016, the environmental world’s equivalent of the Nobel prize, and be feted at the White House.

“Stand up to evil”

From protection of the environment to transparency in political life, having been handed the reins of the country, Caputova is now in a position to make a difference. But it will not be easy. She takes over a country riddled with corruption, as revealed in a piece of investigative journalism published by Jan Kuciuak following his assassination in February 2018. While his alleged killer was still at large Caputova ran her presidential campaign under the slogan “stand up to evil.”

She has become a potent symbol, the chosen one, called upon to save an entire nation from enemies within and without.

Hot on the heels of Caputova’s election victory, last month Sahle-Work Zewde, the oldest of four sisters, became Ethiopia’s first-ever female head of state. The arrival in power of these two women sends a clear message: equality in society will only happen by remaking the political landscape, the first step of which is having more female leaders. The Ethopian government has already asserted its commitment to gender parity in the national assembly and supreme court.

These appointments, and the societal change they provoke are a step in the right direction. Here’s hoping it’s the shape of things to come.